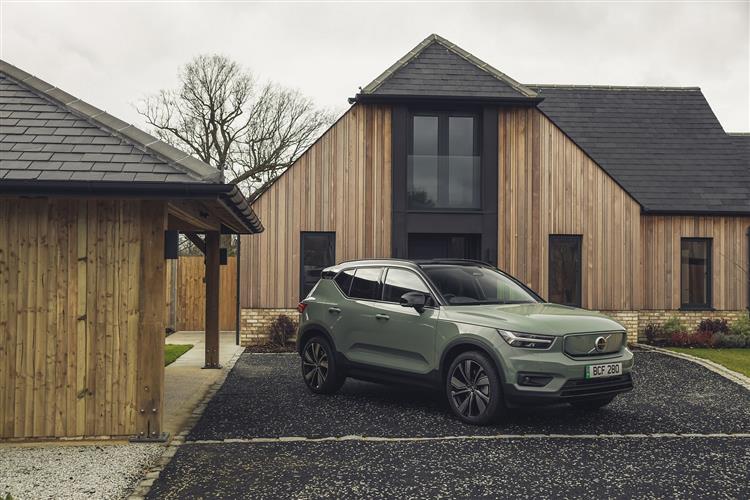 You might be surprised that it's taken so long for Volvo to bring us a full-EV: the marque was, after all, one of the very first to popularise Plug-in hybrid electrification in its cars. Or, conversely, if you know the industry, you might be surprised that this Gothenburg maker is selling any kind of EV at all. In recent years after all, this Swedish manufacturer's Chinese Geely parent company has dictated that development of full-battery power should be largely delegated to Volvo's all-electric subsidiary brand, Polestar. It seems not. Volvo wants (and needs in view of current European directives) to dramatically increase the sales percentage of its electrified models and that can't be done merely by concentrating on mild hybrid and plug-in hybrid engineering. Plus the XC40 sits on the same CMA platform used for the Polestar 2 model, so it was pretty straightforward to create a milkfloat mobility version of this little SUV. Mind you, with 408hp on tap, this car is a long way from milkfloat mobility...

There are two variants on offer, both of which use a 75kWh (usable) battery. The base front-driven single-motormodel offers 231hp. The alternative AWD model offers the twin electric motor set-up (one on each axle) that we've already seen on the top version of the extremely rapid Polestar 2 EV sports saloon. There's 408hp on tap (yes, you heard that right), which seems like it'd be rather excessive for the needs of most likely customers, sprinting you to 62mph from rest in just 4.7s with more torque than you'd get in a Nissan GT-R super sports car - 660Nm of it, at which point, the motor's spinning at a heady 14,000rpm. The EAER driving range on offer isn't quite as good as some notable rivals. Volvo quotes a best of up to 264 miles for the front-driven model - and a best of 259 miles for the AWD version, figures which are a little down on those of an identically-engineered Polestar 2, that deficit being down to this XC40's boxier shape. To get the claimed mileage, you'll need to engage what the Swedish maker calls 'One Pedal Drive', selectable from the 'Driving' menu provided on this centre-dash screen. This dramatically increases the regenerative braking effect when you come off the throttle, to the point where, as advertised, the brake pedal will hardly ever be needed.

This XC40 has been updated with a smarter front bumper and a frameless front grille. That latter feature is blanked off, which is the main visual difference marking out this full-electric XC40 model from the combustion-engined versions of this design. This sort of thing is rarely a great adornment for an EV - and isn't here. That grille panel's there of course because there's no engine to cool. In another update, the signature Thor's Hammer headlights have been augmented with state-of-the-art pixel LED light technology. Otherwise, things are as before, so if you pop the bonnet where the engine of an XC40 used to be, what you'll actually find is a useful 31-litre 'frunk' stowage space. You'll find this a usual place to chuck the charging cables into so that they don't end up getting in the way of everything in the boot. At the wheel, there are few giveaways to this Volvo's battery-powered remit, save for a few EV-specific electronic gauges. Delve into the workings of the central portrait-style 9-inch screen and you'll find that the infotainment system is powered by Android, which means you get a raft of over-the-air Google features, including Maps and YouTube Music built in. What else might you need to know about the cabin? Well because the XC40's basic architecture was designed to accommodate a full-electric powertrain from the start, there are no compromises over combustion versions when it comes to rear seat legroom. Or luggage space. Which is just as well because trunk capacity isn't huge, though the 452-litre capacity figure will probably be quite sufficient for the needs of most owners.

The XC40 Recharge model comes with a choice of single or dual-motor powertrains and the brand's 75kWh battery. Prices start from around £43,500 for the front-driven version, offered in 'Core', 'Plus' or 'Ultimate' levels of trim. The AWD model, priced from around £54,500, comes in 'Plus' or 'Ultimate' spec. Primarily, ordering will be online, though you can do that from a dealer showroom if you'd prefer to have someone guide you through the process. With the government's plug-in Car Grant now capped at £35,000, you're on your own when it comes to the asking figures, whatever kind of Pure Electric XC40 you decide upon, but it's worth pointing out that almost no one considering this car will be thinking in terms of purchasing it outright anyway. In most cases, they won't even be buying it from a dealer, this XC40 Recharge Pure Electric model being the first of the brand's cars to be offered exclusively online - which is the way that all future Pure Electric Volvos will be sold. You can still go into a dealership and order it if you want, but it's probably easier just to go on line and order it from home - probably using the 'Care By Volvo' subscription service, which is the way that up to 95% of XC40 Recharge Pure Electric models are apparently likely to be acquired.

We've already given you this XC40 Recharge model's operating range in our 'Driving Experience' section; a maximum of 264 miles for the single-motor model and up to 259 miles for the dual-motor version. These figures place this Volvo some way down the list when it comes to the range you can expect from a compact EV crossover with a battery of comparable size to this car's 75kWh power pack. Thank this Swedish contender's portly kerb weight (around 2-tonnes) for that. Still, at least charging times are competitive. Overnight charging via a home wallbox will occupy around 8 hours. When out and about, if you come across a 150kW public rapid charger, you'll be able to replenish from empty to 80% in just 40 minutes. You can of course set charging times remotely - in this case via the 'Volvo On Call' app. There are of course, lots of taxation advantages in running an EV. With this one, as with its main rivals, you'll be rated at just 1% for BiK Benefit-in-Kind taxation for the first tax year of use, and at only 2% for the subsequent two years. Servicing will be at the same intervals as any other XC40 (every year or 18,000 miles, whichever comes first), but the bill you get should be cheaper because there will be fewer consumables to replace, though remember that with an EV, tyre wear tends to be greater than with a combustion model.

The government talks about incentivising the sale of electric vehicles. But then progressively reduces buying incentives on them. Car manufacturers talk about wanting to increase the EV percentage of their sales: but then price full-electric models beyond the reach of most buyers. It's a conundrum. And for the time being, it doesn't show any real signs of being solved. This XC40 Recharge Pure Electric model is a case in point. It's a very well engineered little electric vehicle. But it costs a considerable amount. And then there are the usual EV issues: not only that you'll run out of range but also that you might turn up at a charging point and find it's out of order - or there's a queue. Or perhaps you'll plug your EV in at night, then an hour later find out that you're required 150 miles away with only 80 miles charged into the battery. If a car like this is a second vehicle, as it will be in most cases, then these issues become less problematic. But until they're solved - and until prices become more accessible, cars like this, impressive as they are, will continue to be a rare sight on our roads.