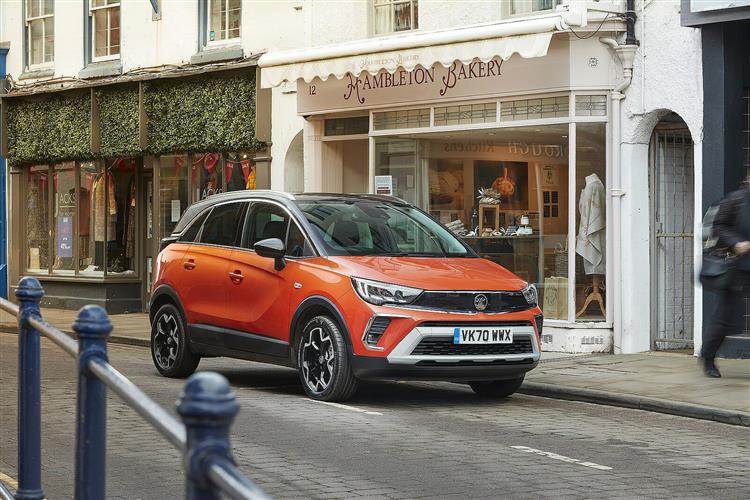 Vauxhall's little Crossland SUV no longer has an 'X' designation but it now looks a more appealing proposition. Jonathan Crouch drives it.

So, yet another small SUV to add to all those in the PSA Group's bulging crossover portfolio. Some of that Gallic conglomerate's latest little Crossovers are based on its most sophisticated CMP2 platform - cars like the Peugeot 2008, the DS 3 Crossback and the Vauxhall Mokka. Others - like the Citroen C3 Aircross - sit on much older underpinnings and this Crossland is one of those, mainly because it's merely a facelift of a car launched in 2017. Still, fashion-led crossover customers shopping in the popular segment for small SUVs won't care too much about that, particularly now this car has such a striking look, courtesy of the same 'Vauxhall Vizor' front end that's given this model's Mokka showroom stablemate so much extra pavement presence. Let's take a closer look.

Surprisingly, there are dynamic as well as cosmetic changes here: well a few anyway. New springs and dampers aim to cure the slightly wayward low speed handling characteristics of the original model and the revised steering system should deliver a bit more feel at the helm. The agility of the previous car is trained - as is its range of engines, which continue as before apart from a range of efficiency updates. That means most folk will continue to choose the familiar PSA Group 1.2-litre three cylinder petrol unit, available in normally aspirated 83PS base guise (with 5-speed manual transmission) or in turbocharged 110PS form (which now gets a 6-speed rather than a 5-speed manual). Plus there's a 130PS version of this unit which must be had with an auto gearbox. We expected Vauxhall to drop the previous diesel (black pump-fuelled small SUVs are a rare sight these days) but the 1.5 Turbo D powerplant continues and the manual variant has an 11PS power increase (to 110PS) and is another recipient of a 6-speed rather than a 5-speed stick shift. This powerplant generates 120PS when mated to the AT6 6-speed auto that makes quite a dent in the efficiency figures. Finally, we need to mention that, like many cars in the SUV 'B' segment, this one can't be ordered with any kind of 4WD system.

Some facelifts offer merely a minor wash 'n brush-up. This isn't one of those. This rejuvenated Crossland features Vauxhall's latest design language, including the bold new Vauxhall Vizor front-end that was first introduced on the MK2 Mokka. A single module now runs across the face of this compact SUV, containing LED lights and the latest Griffin logo. At the back, smarter dark-tinted tail lights and a high-gloss black tailgate surface give the Crossland a wider stance. As before, you can choose a variant with a contrast-coloured roof, if you want more of a sophisticated, personalised feel Budget obviously ran out a bit when it came to the cabin because that's pretty much as it was before. So as before, the centrepiece of dash is an Intellilink infotainment screen which incorporates the usual DAB stereo, Bluetooth 'phone and informational functions. Include the optional satellite navigation system and the screen size increases from 7 to 8-inches. The rear seat can't do anything clever like slide or recline but the standards of leg and head room it offers are still very class-competitive. Out back, there's a 410-litre boot. Push forward the backrest and up to 1,255-litres of fairly flat space is opened up.

Crossland prices start at around £19,000 and there are three trim levels ('Design', 'GS Line' and 'Ultimate'). Vauxhall reckons that over 65% of sales of this car will be to private buyers. For reference, pricing for this car's similarly-sized but more modern-looking Mokka SUV showroom stablemate starts from around £22,000. As before with the Crossland, there's an emphasis on petrol power in the line-up, all the green pump-fuelled engines being 1.2-litre three cylinder units. If at all possible, try and avoid the entry-level normally aspirated 83PS variant and find the extra that Vauxhall asks for the pokier yet more efficient turbocharged version of this powerplant. A premium of around £800 over the base engine gets you a Crossland 1.2 Turbo with 110PS and a 6-speed manual gearbox, which means a starting price of just over £19,000. Find a further £2,000 or so on top of that, you can get yourself the same unit with 130PS and an auto gearbox. As for diesel power, well we'd question whether you really need it, given the relatively small annual mileages likely to be covered by this kind of car. If you really are set on black pump motoring, then you'll need a budget starting from just under £20,500 for the base 110PS Turbo D diesel, with 6-speed manual transmission and 'Design' trim. Another £2,500 or so will get you this diesel unit with mid range 'GS Line' trim and an auto gearbox. Or, if you stretch up to top 'Ultimate' spec and pay around £25,500, you can have this 1.5-litre diesel with a slightly upratefd 120PS output and a manual gearbox. Got all that? Good.

How to summarise? Well ideally, if you came in search of a small, trendy Vauxhall-badged SUV, you'd buy a Mokka because it's a more sophisticated, more modern product. But if the relatively small price saving this Crossland offers you is significant, then you might still find things to like here. When all's said and done, what we've got here is essentially a first generation Peugeot 2008 enlivened by a package of cosmetic embellishments, but the visual facelift changes have at least made this car feel a bit more like a Vauxhall than before. And what matters more is that they've given this model a bit more pavement presence for when you park it outside the gym. That's what matters in this segment. In short, this is the kind of model Vauxhall needs to make. The rest is down to you.