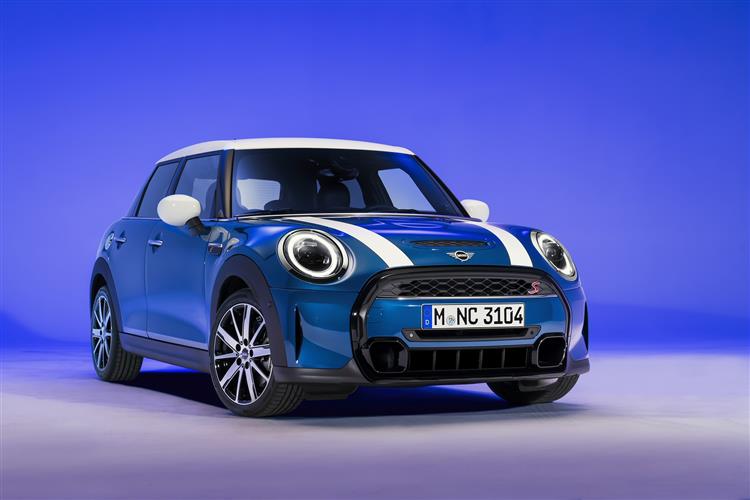 Take a standard MINI, add a dash of length and practicality and you'd have a strong seller. You'd have a car like this, the MINI Hatch 5-Door. There are potentially lots of folk who like the stylish frugality and fun, chuckable, cheeky demeanour of the MINI Hatch 3-Door model but simply can't justify that car's tiny rear seats and restricted boot. Like me perhaps, they've an occasional need to transport up to three kids in the back. And they require a car that won't be daunted by the modest proceeds of a family superstore shop. A car like this one? It's certainly going to be a strong seller for the brand, priced and sized in fertile territory somewhere between Fiesta-shaped superminis and Focus-sized family hatches. You can see why it might appeal. But would you really want one? Let's find out at the wheel of this usefully enhanced petrol-powered 1.5-litre Cooper model.

The key update with this most recently revised model is that it's now possible to order it with adaptive damping - an important option given this car's go-kart-like firm ride, especially with larger wheels. Otherwise it's as you were. Can a slightly bigger MINI like this one really feel like a proper MINI should? Fun, frisky - up for anything? The brand's Countryman crossover model has tried hard in that regard but arguably remains a little too heavy - and perhaps even a little too sophisticated - to quite hit the mark. With his MINI -Door Hatch model though, buyers get the extra doors and at least some of the extra practicality they were seeking without any dynamic downsides. Or none that I can feel anyway. If the stretched wheelbase of this car has done anything to dent the eagerness of the taut MINI chassis, then I couldn't feel it. We reckon the 1.5-litre petrol-powered Cooper model on test here represents the sweet spot in the range. The engine is actually basically the same unit that assists the electric motor in BMW's old i8 supercar. Here, as there, it punches well above its weight, enabling the performance of this third generation version Cooper to at last aspire to the lower-rungs of the hot hatch ladder: 62mph can be dispatched in just 8.2s en route to 129mph, which, I think, will be quite as fast as most will really want to go in this car. MINI driving modes are available as an option, which offer drivers the choice between Sport, Mid and Green modes. Using a rotary switch at the base of the gearstick or selector lever, drivers can swap from the default Mid mode to either Sport or Green. The three choices offer a set-up which is either performance-oriented, balanced or geared towards fuel efficiency. MINI driving modes also influences the ambient lighting, shift characteristics of the optional automatic transmission and the Variable Damper Control - if that option is selected.

The worst mistake any MINI can make is to lose its 'MINI-ness'. And much of that is, after all, tied up in this model's diminutive dimensions. Which, as it happens, aren't so diminutive these days thanks to this third generation Hatch design's increases in width, height and length. To these enhancements, this Hatch 5-Door variant adds 161mm of length and 11mm of height over its Hatch 3-Door sibling, all of this thanks to a wheelbase stretched by 72mm. The styling of this revised model doesn't look all that different, but close inspection will reveal a range of subtle updates. The front-view is dominated by a larger radiator grille with a black, hexagonal surround, flanked by the hallmark round MINI headlights. The position lights have been replaced by vertical air inlets to optimise aerodynamics and the central bumper strip is now in body colour, rather than black. The wheel arch has new contours, the side indicators have been redesigned to feature LED technology and at the back of the car, the fog light is now integrated into the rear apron as a narrow LED unit. On to the differences that this Hatch 5-Door model delivers over its Hatch 3-Door stablemate. Nearly half of the extra length you get with this variant has gone into providing extra rear seat space, though to some extent, the issue lies in getting to it. The extra rear doors are really pretty small, so squeezing in and out can be tricky. Once you're inside on the rear seat though, the news gets better. Anyone who's ever been crammed into the back of a MINI Hatch 3-Door model for any length of time will be astonished by just how much space has been created here simply by increasing the length of the car by a mere 161mm. Interior updates include the standardisation of MINI's largest 8.8-inch centre touchscreen display and Piano Black high-gloss surfacing. Chrome elements have been significantly reduced throughout the interior with the two outer air outlets framed by black panels. The internal air vents have been completely redesigned and are now embedded to be flush with the interior surface. Plus the sports leather steering wheel has been redesigned and conventional analogue instrument dials have been replaced with a digital display.

There are three trim levels on offer here - 'Classic', 'Sport' and 'Exclusive'. There's a £700 premium over the 3-Door body shape. You'll pay from just over £20,000 for the MINI Cooper 5-door hatch in 'Classic' form, with about £1,500 more necessary if you want automatic transmission. That's a lot more than a Cooper used to cost with this body shape, but it isn't too much of an exorbitant sum for such a quick and capable car. Equipment levels feature items such as ambient lighting, auto headlamps and wipers, ISOFIX child seat fixings front and rear and Bluetooth. The MINI hatch buying proposition has always been about tailoring the car to your personal tastes, so you might well indulge in extras like body stripes, a John Cooper Works spoiler and contrasting mirrors. You can also choose from technology such as a head-up display, a MINI Navigation System, MINI Connect telematics and traffic sign recognition. The MINI Touch Controller allows you to write individual letters that the system then recognises when you're trying to input a sat nav destination for instance. MINI has standardised its bigger 8.8-inch central colour infotainment touchscreen, plus auto headlamps and wipers and two-zone automatic air-conditioning. Options include a new multi-tone roof. And heated front seats, a panoramic glass roof, a visibility package including windscreen heating, rain sensors, automatic light control, a Harman Kardon hi-fi speaker system and a sports leather steering wheel. You can also spend your money on Park Distance Control, electrically heated and folding exterior mirrors, and an automatic anti-dazzle function for the interior and exterior mirrors. As you can see, the base retail price is just an opening gambit.

The latest MINI Cooper 5-Door Hatch registers a respectable fuel economy - expect between 51.4mpg and 55.4mpg, depending on wheel size and transmission choice. Emissions are rated at 126g/km for manual models - a decent showing for a car offering this kind of performance. An innovation lies with the MINI Driving Modes, another optional extra. Using a rotary switch at the base of the gearstick or selector lever, drivers can swap from the default MID mode to either SPORT or GREEN. The three choices offer a set-up which is either performance-oriented, comfort-biased or geared towards fuel efficiency. The latter includes a coasting mode when the driver removes their foot from the accelerator pedal. MINI Driving Modes also influence the ambient lighting, shift characteristics of the automatic transmission and the Variable Damper Control - if that extra cost option is selected.

In one sense, it's extraordinary that it took the MINI brand until 2015 to bring us this car. After all, over 70% of all sales in the small hatchback segment are of five-door models. In not offering a conventional MINI Hatch with that option, this franchise was missing out on a significant number of sales. With the extra doors in place, this car has sold quite well for MINI and the company's position in the compact hatch sector has changed significantly. In the eyes of many potential customers, the extra versatility of this variant has turned what was previously an un-buyable car into a really credible proposition. Which is exactly what it is in 1.5-litre petrol Cooper guise. This engine is good enough to make you wonder whether there's really any need to trade up to the much pricier 2.0-litre Cooper S. Or indeed whether it's worth finding the premium for diesel power. It's that good.