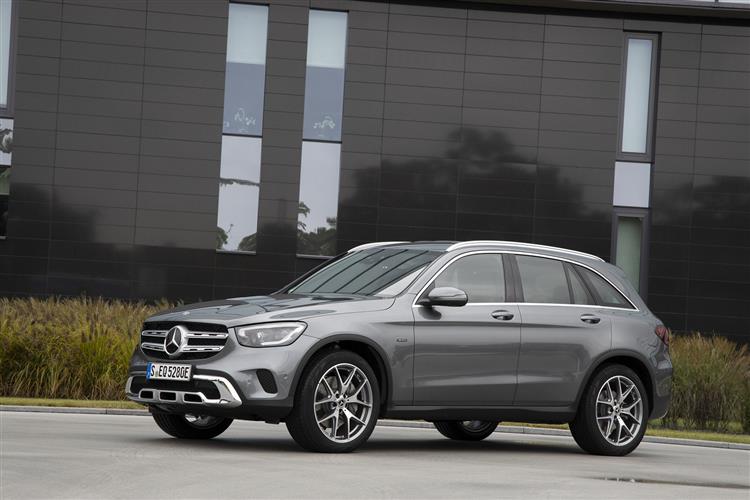 With its mid and large-size SUVs, Mercedes has taken a fundamentally different route to providing PHEV power from that which features in rivals. As with the large GLE PHEV model, this GLC 300de uses a diesel-powered plug-in hybrid unit, not a petrol one. This 2.0-litre hybrid powerplant is borrowed, as is much else of the GLC's engineering, from the C-Class range. Mercedes needed the GLC 300de because all the brand's key rivals now offer petrol plug-in models in the upper mid-sized premium SUV segment - namely the BMW X3 xDrive30e, the Audi Q5 55 TFSIe and the Volvo XC60 Recharge T8. So what can this GLC offer other than diesel economy to make it stand out from that trio of very complete rivals? Time to find out.

The GLC 300de mates a 2.0-litre diesel unit with a 90kW electric motor that when fully charged is able to achieve up to 27 miles of WLTP-rated all-electric driving at speeds of up to 81mph. If overall efficiency isn't a priority, the GLC 300de can also be a pretty rapid thing, thanks to quite a prodigious total system output of 306hp, enough to dispatch 62mph from rest in 6.2s en route to 143mph. There's a substantial 700Nm of torque on offer, which is why this variant can tow up to 2,000kgs. But it will really feel its two-tonne kerb weight if you start to try and throw the car around. For those prioritising an ultimately absorbent ride, air suspension can also be added at extra cost. The latter option is pretty desirable. 'AIR BODY CONTROL', as Mercedes call it, promises a cosseting ride when you want luxury or flat, sportscar-like handling when you're in a hurry. 4MATIC 4WD is standard, as usual on a GLC and the powertrain works through a standard 9G-TRONIC PLUS 9-speed auto gearbox which works with the usual 'DYNAMIC SELECT' 'Eco', 'Comfort' and 'Sport' driving modes that alter drive response, steering feel and ESP settings.

There are no real styling changes to differentiate this GLC 300de plug-in model from its conventional range stablemates, though the eagle-eyed will spot the different badgework and the addition of an extra charging flap. As with conventional variants, there's a choice of the standard SUV body shape or a sleeker GLC Coupe body style. All variants of this PHEV get a studded 'Diamond'-style single-louvre grille that incorporates shiny chromed pins, while further down, there's sportier treatment that sees large corner cut-outs embellished on each side by twin black slats. This appendage is flanked by smart, slim headlamps that feature High Performance LED beams as standard. The GLC's cabin was always a showroom selling point and with this current model, thoughtful changes have further enhanced it. A smart three-spoke steering wheel incorporates little touchpads, the left hand one of which can operate the 10.25-inch touchscreen positioned on top of the dash. This sophisticated media set-up has various dedicated PHEV efficiency read-outs and incorporates the Stuttgart brand's new-generation 'MBUX' ('Mercedes-Benz User eXperience') multimedia platform with its clever 'Hey Mercedes' voice-activated functionality. And in the back? Well if you've been persuaded to buy one of these in preference to a C-Class Estate, it's here that that decision will pay off. The GLC has 33mm more length in its wheelbase than one of those would offer and nearly all of that has been used for the benefit of folk at the rear. The PHEV powertrain exacts a few special compromises in the boot though, the SUV body shape's usual 550-litre capacity falling to 395-litres. With the Coupe, capacity falls from 500 to 350-litres.

From the launch of this GLC 300de, prices for the SUV body style were pitched in the £49,000 to £56,000 bracket and there was a choice of 'AMG Line', 'AMG Line Premium' and 'AMG Line Premium Plus' trim levels. For the alternative GLC Coupe body shape, budget for a premium of around £3,000 more. To give you some perspective, this 211hp petrol plug-in hybrid model in SUV form costs around £6,000 more than an equivalently-specified 194hp GLC 220d diesel. A 245hp GLC 300d diesel is around £4,000 less. At least you get plenty of equipment. Even the base 'AMG Line' trim gets you an AMG body styling kit with a diffuser-look rear apron and 19-inch AMG wheels. Inside at this level, there are AMG sports seats part-trimmed in suede-like DINAMICA microfibre, plus you get a flat-bottomed steering wheel, AMG floor mats, a black fabric roof liner, sports stainless steel pedals and high gloss inlays in grey open-pore oak. You've to go further up the range though, if you want a 12.3-inch digital instrument cluster and the 'Smartphone integration' system that gives you the missing 'Apple CarPlay' and 'Android Auto' smartphone-mirroring features. Still, at least if you can stump up to a plusher variant, you get a lot more technology - things like 'MULTIBEAM LED' headlights which can tailor their beam to suit the road you're on and surrounding traffic movements. And something that Mercedes calls 'augmented reality navigation', effectively a live camera feed of the road ahead overlaid with house numbers, road names, direction arrows and other useful bits of information that'll help you find your way.

We've covered some of the key facts already in our driving section. The way that an electric motor powered by a 13.5kWh battery is capable of running the car on electricity alone for up to 27 WLTP-rated miles before a 2.0-litre combustion engine chimes in. This Plug-in variant can be charged from 10 to 100 per cent in an hour and a half with a 7.4 kW charger, or in five hours from a standard three-pin UK socket. Based on notoriously unrealistic WLTP cycle figures produced for plug-in hybrids, the diesel GLC 300de SUV is supposed to be able to achieve up to 156.9mpg on the WLTP combined cycle and emit up to as little as 49g/km of CO2. Of course, you won't get anything like that in normal use, but we could see a realistic return of around 60-70mpg being regularly achievable from a GLC 300de, which in itself is pretty impressive. BiK taxation is rated at 12% - as opposed to 33% for a GLC 220d or 36% for a GLC 300d. Insurance groups range from 40E-41E. What else? Well, you get a comprehensive three year warranty that has no mileage restriction (rival BMW and Audi warranties restrict you to 60,000 miles). And this package is built upon by Mercedes' Mobilo scheme which delivers breakdown cover for up to thirty years, as long as you continue to have your car serviced at a Mercedes main dealer. And it's worth knowing that your maintenance outlay can be kept a little in check by going for the optional Service Care package that takes care of routine maintenance, spreading the cost of regular servicing.

We're still at the stage where you have to be completely sold into the concept of plug-in hybrid technology to choose a car like this GLC 300de. If you're not, you'll find yourself wondering whether saving £6,000 in choosing a GLC 220d diesel might not be a wiser course of action to take, given that it'll be the best part of a decade at least before diesel becomes an impossible option to choose with ever-more stringent emission restrictions on European markets.