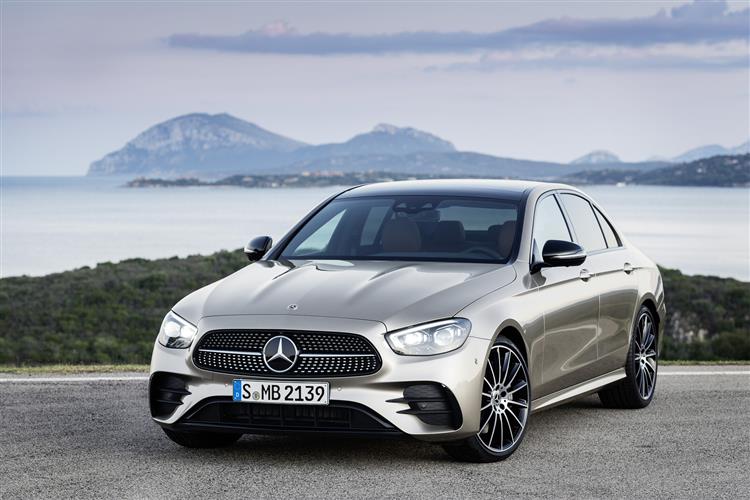 In tenth generation guise, the Mercedes E-Class has set the standard for its Executive segment rivals. Jonathan Crouch looks at what's on offer in the revised range.

More than 1.2 million global customers have purchased this tenth generation E-Class in its saloon and estate forms since this W213 version was first introduced back in 2017. This updated model gets a smarter look and quite a bit of extra technology to keep it current in the face of fresh or updated rivals introduced since the original launch. No car epitomises what Mercedes-Benz stands for better than the E-Class. We've known it by that name since 1986 but the history of this model actually dates all the way back to 1953 and the introduction of the original 'W120' series design, widely regarded as the brand's first truly modern motor car. And this model has remained truly modern throughout the many generations since, pioneering everything from safety passenger cell technology to turbodiesel engines, innovation that continues here. Will it all be enough to frighten rivals as good as BMW's 5 Series, Audi's A6 and the Jaguar XF? Let's find out.

Some full-sized Executive saloons claim to be sporty: cars like BMW's 5 Series and Jaguar's XF. Others, like this one, simply don't feel the need to try that hard - unless an AMG V8 happens to beat beneath the bonnet. It probably won't do. Electrification is the theme with this revised tenth generation model, with plug-in hybrid technology now available right across the range on the diesel engines as well as the petrol ones, plus as before, there's a choice of rear-driven or 4MATIC AWD drivetrain options. All models come with 9G-Tronic 9-speed auto transmission. The volume unit is the 2.0-litre four cylinder petrol powerplant that features on the base E200 variant, an engine which now features an improved 48-volt mild hybrid system now integrated into the casing of the nine-speed automatic gearbox. This lightly electrified set-up can produce up to 20bhp and 180Nm of extra torque to reduce the load on the petrol engine. Completely new to the E-Class line-up is the six cylinder petrol unit of the new E450 (borrowed from the CLS 450). As before, there's a petrol plug-in variant too, the E300e, which uses a 2.0-litre petrol engine combined with a 13.5kWh battery; together, these power sources have a combined output of 333hp and 790Nm of torque. And there's an all-electric range of up to 35 miles. In the diesel range, things kick off with the 194hp 2.0-litre E220d with 400Nm of torque. There's also, rather uniquely, a diesel plug-in variant, the E300de, which has a 2.0-litre diesel engine paired with a 13.5kWh battery; the combustion engine produces 194hp, while the electric motor adds a further 122hp and there's an all-electric range of up to 34 miles. At the top of the diesel line-up is the six cylinder E400d 4MATIC, which produces 340hp and 700Nm. If you want a sporting E-Class with a potent petrol powerplant, there's also a revised version of the 3.0-litre biturbo mild hybrid six cylinder engine used in the potent Mercedes-AMG E 53 4MATIC+ variant, which benefits from slightly more electrified assistance, though the total output (435hp) is the same as before. Beyond that, there's the 4.0-litre V8 E 63 4MATIC+ S model which offers 612hp. Even on mainstream E-Class models, handling should be sharper than you might expect, thanks to various 'Direct Control' suspension systems with selective damping. There's also the option of an 'Air Body Control multi-chamber air suspension' set-up offering the kind of pillowy ride that will remind you of the larger Mercedes S-Class saloon. A 'Dynamic Select' switch in the cockpit enables the driver to select from four 'Air Body Control' modes: 'Comfort', 'ECO', 'Sport' and 'Sport+'. The additional 'Individual' option allows drivers to configure their vehicle to suit their own preferences.

The complete E-Class line-up includes saloons, estates, coupes and cabriolets but it's the saloon and estate that are our focus here. As facelift restyles go, this is quite a significant one. The front end features softer, re-shaped headlamps with full-LED beams and the grille's been revised too, as has the front bumper. As before, this tenth generation model displays hallmark Mercedes-Benz saloon proportions, the elongated bonnet coupled with a coupe-esque roof that flows into a sensual, broad-shouldered tail. The silhouette remains characterised by short overhangs, a long wheelbase, large wheels and taut well-defined flanks displaying dynamic feature lines. At the rear end on the saloon variant, the previous rounded tail lamps have been replaced by wider, slimmer units which extend further across the back end and into a boot lid that now has a sharper upper edge. The estate body style has a rear section much as before. Inside, there's a new split-three spoke steering wheel with more responsive touch-sensitive buttons. And the standard offering sees the front of the cabin dominated by a couple of 12.3-inch screens, one for the instruments and the other for the infotainment functions. What's really different though, is the fact that these monitors now work with the brand's latest MBUX interface, which means that you get far more sophisticated "Hey Mercedes" voice control and a lower touch-sensitive pad to replace the previous click wheel controller. As before, it does of course all feel suitably premium, with leather-covered doors and subtle ambient lighting. High-quality materials include open-pore woods, wood with what Mercedes calls 'a yachting look' and a novel metal fabric. Rear seat space is generous. And the saloon model offers a 540-litre boot, with folding rear seat backs able to extend that further if need be. As before, the E-Class estate is the biggest station wagon in the full-sized Executive segment, offering up to 1,820-litres of total fresh air.

For a car that performs as broad a remit as the E-Class, encompassing everything from German domestic market taxi fleets to family transport, company cars and all points in between, there's a pressing requirement for the car to turn in some great efficiency measures. To that end, Mercedes has worked hard to improve running costs this time round, which are aided by the increased emphasis on electrification across the range. Let's look at the WLTP-rated figures, giving you the saloon stats. The E200 petrol manages up to 38.7mpg on the combined cycle and 165g/km of CO2. For the E450 4MATIC, the stats are 31.4mpg and 204g/km. The E300e petrol plug-in manages up to 176.6mpg and 37g/km of CO2. And the diesels? Well the efficient 2.0-litre biturbo diesel engine in the volume E220d model manages up to 53.3mpg on the combined cycle and up to 139g/km of CO2. If you go for the six cylinder E400d diesel, the saloon version of that variant manages up to 42.2mpg and up to 176g/km - not bad for a 4WD high performance diesel full-sized executive model. The Plug-in diesel variant will really help your tax return; the E300 de offers a combined cycle fuel reading of 235.4mpg and an official CO2 reading of just 33g/km. And otherwise? Well this model series is designed for the long haul. There's plenty of proof of that: Greek taxi driver Gregorios Sachinidis clocked up 2.9 million miles in his 1976 240D and though build quality took a bit of a dip with the W120 series range we had between 1995 and 2003, it's now better than ever with this tenth generation version. This car will easily out-last you, one reason why all-important residual values have traditionally been strong with diesel and lower-order petrol engines. Unless you do something silly like specify an overly bright colour scheme, you can expect to get over 60% of your initial purchase price back after three years.

This enhanced version of the 'W213'-series Mercedes E-Class puts in an impressive performance. Beforehand it felt like quite an expensive car. Now it feels like one that's pricey but which offers a compelling value proposition. It drives with genuine polish, yet is capable of stepping from cruiser to carouser without breaking a sweat. Operating the car is relatively easy and you rarely feel as if it's imposing its will on you, unlike certain rivals we could mention. The abiding impression is that this is a very carefully considered vehicle, developed by a company steeped in a proud engineering tradition. The latest changes future-proof this E-Class a little further against the constant assault from its key rivals. Perhaps the most interesting thing about this improved tenth generation model though, is the fact that its appeal has broadened so far. It was once hard to see anybody under the age of fifty contemplating an E-Class. A more dynamic image and a focus on sharper design and driving dynamics has seen that demographic become younger. What's more, all this has been achieved without diluting this design's Stuttgart DNA - and without alienating its legacy market. That is the mark of a very special car.