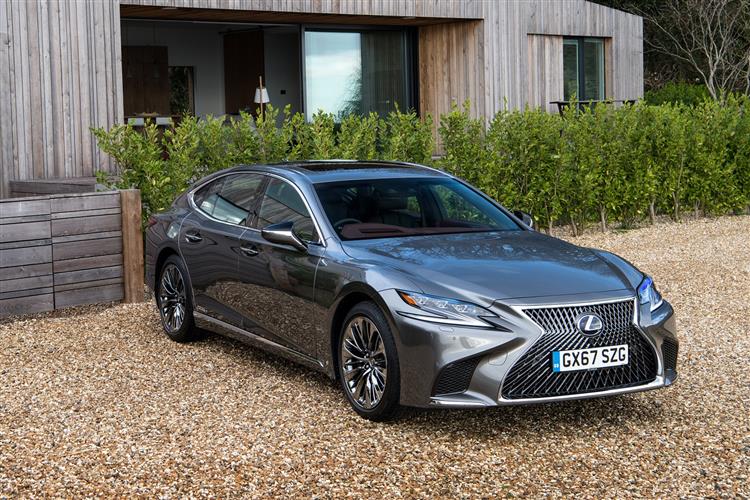 The ultimate Lexus is this one, the LS luxury saloon, now usefully improved. This comes only in LS500h hybrid form these days and it'll be a rare sight on our roads. Jonathan Crouch takes a look at what's on offer.

The Lexus LS. Back in 1989, the launch of the original version of this model redefined what a luxury saloon should be, the engineers behind it tasked to create nothing less than 'the best luxury car in the world'. Few would argue that they succeeded. It seems rather ridiculous now to remember that back then, the European makers who ruled the flagship four-door market sector defined luxury as being as much about wood and leather as it was about ride and refinement. Thanks to this Japanese brand, cars of this kind were finally transformed from boardroom barges to the technological showcases buyers had a right to expect from their inflated price tags. Today, the LS is still a technological showcase, but it isn't the obvious segment choice that it was for a brief period in the early Nineties until the European opposition caught up. The engineers have been working on that though, the result being the improved version of the fifth generation model we're going to look at here, a boardroom segment full-Luxury saloon that claims to offer a rather unique blend of design, technology and performance, extending the boundaries of automotive luxury. That's quite a claim when other rivals in this segment include contenders as accomplished as the Mercedes S-Class, the BMW 7 Series and the Audi A8.

In the past, Lexus hasn't ever bothered to make the LS feel in any way sporty - and doesn't see any need to start now. Most owners spend 90% of their drive time in the most normal of the provided drive modes, using light throttle inputs - usually around town. So this improved LS model's 3.5-litre V6 full-Hybrid petrol engine aims to be better in that environment, where it most matters. The engineers have increased the level of assistance delivered by the hybrid system's lithium-ion battery. That in turn reduces the amount of throttle the car needs to accelerate, resulting in what the brand calls a 'smoother and more linear' acceleration curve. More comfortable city driving is the result, though Lexus claims there are also benefits when it comes to winding roads and hill starts. That greater battery output allows the petrol engine to operate at lower revs, reducing vibration and noise. There have been other changes to the drive experience too. The 'AVS' 'Adaptive Variable Suspension' system has been updated to improve ride quality. Plus the engine mounts have been changed. And thicker seat bases have been added and tyre sidewall stiffness reduced, so occupants are less likely to feel tarmac vibration. To suit the current zeitgeist, there are also more autonomous driving features. Otherwise, things are much as before. The 3.5-litre petrol V6 fitted to the single LS500h model puts out 295bhp but is boosted by a hybrid system to produce a 'total system output' of 354bhp. This package powers the rear wheels in most models which are suspended at each corner by multi-link suspension units. There's also an AWD version available for those wanting it. In other markets, this powerplant comes fitted with twin turbochargers; unfortunately, we don't get that version here, which means that the engine has quite a job on shifting nearly 2.5-tonnes of Oriental real estate. Still, 62mph from rest is dispatched on just 5.4s in the rear-driven variants, en route to a top speed that as usual in cars of this kind is artificially restricted at 155mph.

The LS has always been understated and this updated version of the fifth generation model is no different. You'll certainly struggle to spot the changes made to this facelifted design, even if you're amongst the rare few who chose the original version of this MK5 model. So, to help, we'll tell you that there's a darker radiator grille, a re-profiled front bumper - and fresh alloy wheel designs for the 'F-SPORT' model. The headlights are a little different too, subtly re-shaped and now incorporating the 'Bladescan Adaptive LED' technology we first saw on the RX, which uses moving mirrors rather than projectors to adjust the headlamp beam. Inside, the main change lies with the new 12.3-inch touchscreen infotainment system, which is now (at last) compatible with 'Apple CarPlay' and 'Android Auto' and features a useful 'call-up' switch which gives the driver instant access to the most frequently used controls. A key improvement you can't see is the more supportive urethane rubber that undergirds the seat padding, that chair as before trimmed in exquisite leather and featuring 20 or 28-way-adjustability, as well as a range of massage functions from 'stretch' to 'Shiatsu'. There's also now a digital rear view mirror to improve rearward visibility. As before, when you get in, the seatbelt presents itself and its holder even extends by 50mm to receive the buckle. Lovely. The rear compartment is beautifully trimmed, though headspace could still be more generous. Less surprising (given that this is a hybrid) is the relatively modest levels of boot space - the quoted figure is 430-litres.

As before, prices sit in the £80,000-£115,000 bracket and the range begins with standard 'LS' spec, which together with the 'LS F-SPORT' variant, can only be had in rear-driven form. A mid-range 'LS Premium Pack' variant is offered with the choice of rear-wheel drive or AWD. And the top 'Takumi' models (which start from around £105,000) only come in AWD form. Equipment levels of course are generous, with 20-inch wheels, four-zone climate control, leather upholstery, 20-way power-adjustable heated and ventilated seats and the Lexus Premium Navigation system all standard. Most models get a seat massage programme for the front chairs too. Avoid entry-level trim and you also get a thumping 23-speaker Mark Levinson Reference surround sound audio set-up too. Adaptive Variable Suspension is standard and above entry-level trim, you get full air suspension too. Safety-wise, all models get the 'Lexus Safety System+', which includes 'Pre-Collision' autonomous braking, Adaptive Cruise Control, Road Sign Assist, Lane Keep Assist, Sway Warning and Automatic High Beam and Adaptive High beam features for the Triple-LD headlamps. There's also a Blind Spot Monitor and a 'Rear Cross Traffic Alert Brake' system to warn you of oncoming traffic when you're reversing out of a space. A new safety package called 'Lexus Teammate' allows the car to automatically change lanes and overtake other vehicles. Our favourite new feature though, is the fully automated parking system, which can recognise spaces you use regularly, store details on them and guide the LS into the required bay, even if the space hasn't been marked with lines and there are no adjacent vehicles.

Ultimately, you don't buy a huge V6 petrol-powered luxury saloon like this and expect it to be an inexpensive thing to keep on the road. Which is also the case here, despite all that hybrid badging. Self-charging hybrid technology we should point out: this LS500h doesn't have plug-in PHEV tech; Lexus doesn't think that's needed. Even so, this LS returns 35.3mpg on the combined cycle and 182g/km of CO2 in rear wheel drive form. Go for the minority-interest AWD version and those figures fall only slightly - to 31.4mpg and 214g/km. The insurance group is a top-of the-shop 50E rating across the range. To maximise your returns, you'll need to make frequent use of the 'Eco' setting in the Drive Mode Select system. This reduces throttle response and engine power output in relation to use of the accelerator pedal to maximise fuel efficiency at the same time as limiting the voltage of the power control unit. The best part of owning a Lexus is that you can be almost certain that nothing will go wrong. Even if such a thing ever happened, so efficient and pleasant are the dealers that you'll be almost glad it did.

The LS is - and has always been - the car its brand is built upon. The day that Lexus can't bring us a credible large luxury saloon to challenge the best of the premium European makers will be a day the company will have taken its eye off the ball with too much of its focus on sports saloons, compact executive hatchbacks and SUVs. This improved fifth generation LS reassures us that that time is unlikely to ever come. While this isn't a class leader, it's still a desirable and very different class contender in so many ways, primarily when it comes to refinement and cabin luxury in this segment. Driving one of these is an experience, but one that few boardroom buyers will ever get to try. They'll dismiss this car for its lack of Plug-in hybrid technology, EV tech or diesel power. They'll bemoan the doubtful residual values. Or assume that driving one will be like piloting a waterbed. Which is a pity because for all its faults, this LS is a car that many top executives would really enjoy owning. It ought to make your short list - and if it does, there's the added appeal that no one else in the boardroom will have one.