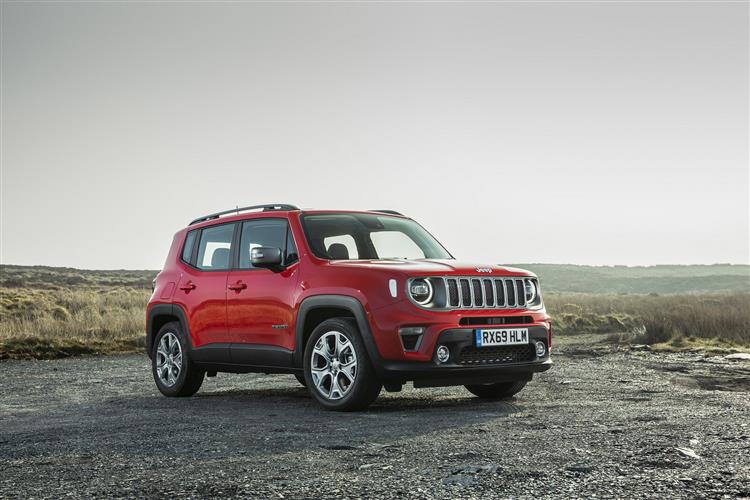 Take a respected brand, a fresh and vibrant market segment and a willingness to do something different. Then create from that a product with uncompromising looks, real capability and clever design. The result you'd get certainly wouldn't be ordinary. It wouldn't please traditionalists. No, in automotive terms, what you'd get would be something like this, the Jeep Renegade. At its original launch here in 2015, news that this Renegade was almost entirely based on Fiat's 500X had Jeep die-hards choking on their beer. These people needed to allow for the fact that much had been done with these underpinnings in creation of a tougher, more rugged and very different product. It's certainly one that's attracted widespread interest and now accounts for over 70% of Jeep's UK sales. It's achillies heel was previously an ancient couple of petrol engines, which in 2018 were dumped as part of the changes made to this smarter, more sophisticated facelifted model. A 4xe PHEV variant was added to the range in 2020.

Beneath the bonnet, things kick off with an efficient 120hp 1.0-litre three cylinder petrol unit. Above that, there's a four cylinder 1.3-litre powerplant, available in 150 and 180bhp guises. Ideally, you want to try and stretch to the 1.3 because the base 1.0-litre unit doesn't really have enough pulling power to shove the Renegade along with much conviction. The automatic gearbox that goes with the lower-powered version of the 1.3-litre engine isn't especially slick-changing; the uprated 9-speed auto 'box that goes with the 178bhp 1.3 is better. If you're looking at a diesel, you'll need the top 4WD 'Trailhawk' version, which uses a 170bhp 2.0-litre Mjet unit. All petrol models are front-driven - except the '4xe' Plug in Hybrid variants. To create the PHEV drivetrain, Jeep has taken this model's usual 1.3-litre four-cylinder petrol engine (which for 'Longitude' and 'Limited' models has 128bhp) and mated it to an 11.4kWh battery pack and a 59bhp electric motor. Total system output is 187bhp for these two mainstream variants, hence the rapid 7.1s rest to 62mph time. The electric motor drives the rear axle, delivering four-wheel drive. And the battery has a WLTP-rated driving range when fully charged of 26 miles. There's also a 'trail rated' 'Trailhawk' version at the top of the range that uses the same electrified layout but mates it to the 1.3-litre petrol engine in an up-rated 178bhp state of tune, taking total system output up to 237bhp. Either way, the power is marshalled by a 6-speed auto gearbox.

The Renegade has always sold on its styling - and it still will. There are some subtle aesthetic tweaks with this revised model but the main changes lie with the adoption of LED technology for the headlamps and tail lights. As before, the squarical profile features lovely tight overhangs and some very cool detailing. What is particularly interesting is the way the design includes some very traditional Jeep design cues but isn't afraid to twist them a bit into something resolutely modern-looking. That aspect you will either love or hate. Cover up the badges inside the car and, yes, you would probably think you were in a Fiat product, but if you've had a look at the latest Fiat range, that's no bad thing. Jeep says that the fascia's been updated but it's difficult to see many changes apart from the improved Uconnect touchscreen infotainment system, which on top variants features a big 8.4-inch monitor. This has clear menus, sharp graphics and useful shortcut buttons, plus it comes with Apple CarPlay and Android Auto, so you can use apps from your smartphone (such as Google Maps and Waze) while driving. As for practicality, well it's a bit pinched in the back, but then that comes with the territory when you've got this little length to play with.

The Renegade can't afford to be an expensive car to run, but it rather was in its original petrol forms. This facelifted version does much better thanks to its more modern 1.0-litre three cylinder and 1.3-litre petrol units. The 1.0-litre variant manages 42.2mpg on the combined cycle and 152g/km of CO2. As for the 4xe PHEV, well when fully charged, that plug-in version offers an electrified driving range of up to 26 miles. Jeep claims that up to 134mpg is possible on the combined cycle when driving in 'Hybrid' mode; and the brand claims a CO2 reading of under 50g/km. With a typical 7.4kW garage wallbox, you'll be able to recharge in just 1hr and 40 minutes. Of course, the ultimate figures you achieve in any Renegade will depend very much on how you drive, something you can monitor and improve if you've downloaded the infotainment system's 'Uconnect LIVE' app onto your smartphone. This gives you an 'eco:Drive' section that enables you to develop your driving style, save fuel and check your car's CO2 emissions in real time. During each trip, 'eco:Drive monitors four driving parameters: acceleration, deceleration, changing gears and speed variation. There's also a 'my:car' feature that allows you to check your fuel level and tyre pressure, choose an assistance service if you have an emergency and be informed if there's anything wrong with your vehicle. What else might you need to know? There's an unremarkable three year / 60,000 mile warranty, though you do get three years of breakdown cover included in the deal. We'd want to opt for the 'Mopar Vehicle Protection' 'Freedom Pack' which extends the warranty to five years and provides competitively priced servicing and assistance plans.

This Renegade has brought a long overdue dose of credibility to the small SUV segment. Here, you get plenty of style, in a bluff, tough Jeep kind of way, but there's decent substance behind that too, with near-family-sized practicality and the potential for far more off road prowess than any other car in this segment can provide. So you get a little more than you might expect to from this class of car - which is just as well, given premium pricing that lifts this Jeep well clear of cheaper offerings in the Juke-genre. If you're OK with that and dig the distinctive look, then potentially, there's much to like here, especially with this current model. The efficient engineering, strong safety standards and hi-tech features you'd want a reasonably expensive family car to provide are here packaged with a depth of character you simply wouldn't think you'd find at this price point. The result is the kind of car people talk about - the sort almost everyone will have an opinion on, so shy and retiring types should shop elsewhere. In a sea of compact Crossovers, this one's very different from the norm. A renegade if you like - perhaps, just as every Jeep should be.