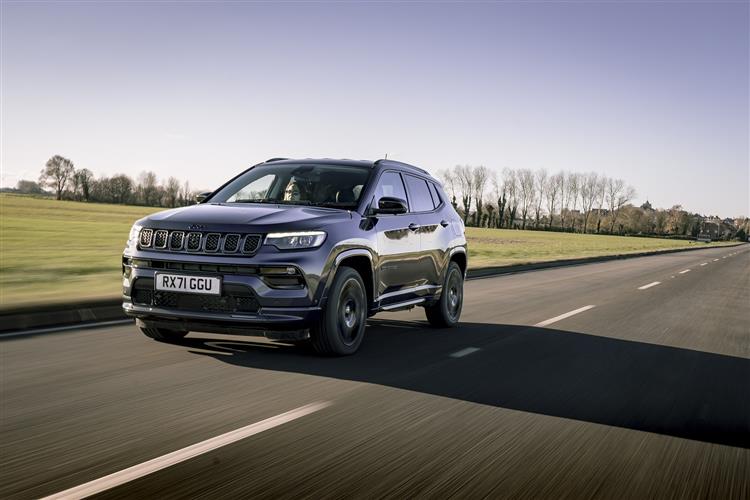 You might still have a hard time thinking of Jeep as an Italian brand, but primarily that's these days what it really is. The cars are built there - and sell well there too. In fact the country's best-selling PHEV is the plug-in version of the car we look at here, the Jeep Compass. The Compass has been greatly updated in recent times, as it needed to be to keep up with key mid-sized SUV Qashqai-class rivals, all of which have been either facelifted or completely redesigned in recent times. The plug-in all-wheel drive Compass 4xe (which, as the badge suggests, shares the petrol PHEV system used by the smaller Renegade 4xe) headlines a rejuvenated line-up which also includes more affordable front-driven e-Hybrid and 1.3-litre conventional petrol variants. The British market has always had a soft spot for Jeep: should it entertain this one?

The Compass engine range looks very different now. In contrast to the old-fashioned MultiAir petrol and Multijet diesel engines offered when this 'MP/552'-series second generation design was first launched in 2018, there's now a choice of three powertrains familiar from the smaller Renegade. At the bottom of the range, there's a Fiat-sourced 1.3-litre 129bhp petrol unit mated to front wheel drive, which uses a six-speed manual gearbox and can tow up to 1,750kgs. Your dealer though, will also want you to consider one of the electrified models. The first option is is the mild hybrid front-driven 'e-Hybrid' variant, which is based around a four cylinder 1.5-litre unit which puts out 130hp and 240Nm of torque and is mated to a 7-speed dual-clutch auto transmission. The propulsion system includes a built-in 48 volt 15kW (20hp) electric motor delivering 55Nm of torque, which can propel the wheels even when the internal combustion engine is turned off. At the top of the range is a 4xe Plug-in hybrid variant, which has a 178bhp version of the base model's 1.3-litre engine allied to an electric motor on the rear axle, creating a four-wheel drive model with a 6-speed auto gearbox and a total output of 237bhp. The 4xe offers up to 30 miles of electric-only driving range when the 11.4kWh battery is fully charged. This PHEV variant offers the usual choice of driving modes that you'd expect with a car of this kind, in this case either electric only, Hybrid or one that enables you to save charge for future use in city driving. As you'd expect from the output figure quoted earlier, 4xe performance is quite sprightly: despite this electrified version's extra kerb weight, it'll hit 62mph in 7.5 seconds. And if you want to attempt any kind of off road traversing in a model of this sort, this Compass 4xe would by far be the best choice thanks to its better traction and body clearance from the ground.

This second generation 'MP/552'-series Compass has been given a darned good wash and brush up here. There's the usual 7-slot front grille, but flanking it are bolder headlamps now featuring full-LED technology. You can have a contrast colour roof if you want, the tail lights are now also of the LED kind and the trademark trapezoidal arches can house Iarge wheels of up to 19-inches in size, allowing you to make the appropriate statement in the gym car park. What's more significant though, are the changes which have taken place inside, where the cabin gains a new 10.1-inch 'Uconnect' infotainment central screen that works up to five times faster than the previous display and incorporates Alexa integration, automatic over-the-air updates and "Hey Jeep"-activated voice functionality. This monitor also incorporates 'Apple CarPlay' and 'Android Auto' smartphone mirroring wireless technology so that you can connect and access two smartphones at the same time without having to connect a cable Perhaps even more importantly, the interior now looks and feels more European - as perhaps you'd expect now that this model is being built in Italy. There's lots of storage space and two adults will be comfortable on the back seat, though it would be a bit of a squash for three. Out back, there's a 438-litre boot. It's annoying though, that you can't flatten to the rear bench without coming round to the side doors.

Jeep isn't bothering with poverty specs for this rejuvenated Compass range. Let's start with the 1.3-litre front-driven models, which both come only with a six-speed manual gearbox. The least well equipped version you can choose is very well specified indeed, offered in 'Night Eagle' form with a black body styling pack that includes 18-inch gloss black wheels. The brand wants around £30,000 from you for that. Or you can find thousand pounds more and get a 1.3-litre Compass in plush 'Limited' form. Next up is the Compass e-Hybrid, priced from around £33,000 and offered in 'Night Eagle', 'Limited', 'Upland' and 'S' forms. Obviously, you'll need to find more for the all-wheel drive, more powerful Plug-in hybrid 4xe versions. There are two, the 'Trailhawk' (which costs around £40,000) and the plusher 'S' (which retails at around £1,000 more). As you'd expect from a PHEV, you can only have 4xe variants with an automatic gearbox, this one featuring six speeds. Across the range, equipment includes a 10.1-inch 'Uconnect' central screen with navigation, wireless 'Apple CarPlay' and 'Android Auto' smartphone mirroring and "Hey Jeep" voice functionality. 18-inch glossy black diamond alloy wheels are standard, with 19-inch alloys optional on the 'Limited' model. The headlights and tail lights are of the LED variety and you can have a powered tailgate with a kick sensor. Adaptive Cruise Control and Lane Keep Assist both come standard, along with Traffic Sign Information and Intelligent Speed Assist.

The 1.3-litre Compass model's 'Firefly'-series 1.3-litre petrol engine is very different from the aging green pump units we saw fitted to this MK2 Compass at its original launch. It's Euro6d-compliant, includes 'GPF' 'Gasoline Particulate Filters' and features all-aluminium construction that makes it impressively light. It uses the Fiat Group's 'MultiAir' technology in its third generation form, which improves combustion efficiency by adjusting valve lift and timing. Other 'Firefly'-series engineering focus points include reduced internal friction, a lower compression ratio and a very compact combustion chamber to benefit thermal efficiency. As for the figures, expect up to 40.3mpg on the combined cycle and up to 152g/km of CO2. You can improve further on this showing if you opt for the alternative 1.5-litre e-Hybrid engine. The PHEV 4xe variant does heaps better of course, though only if you keep it plugged in. If you don't, you'll merely be driving around in a pretty heavy petrol-powered Jeep and there's nothing very frugal or efficient about that. But use the battery to its fullest and the WLTP figures suggest that, with the entire 30 mile driving range regularly maximised, official fuel economy will be rated at between 141.2 and 156.9mpg. You'll never actually record that in real motoring of course, but you should get fuel figures comparable to those of the old diesel variant: and the low CO2 figure of up to 44g/km will help with your BiK tax payments and VED tax disc. Insurance is group 29E.

In its earlier form, the Compass was a marginal player in the mid-sized SUV sector and we can't see that changing much. But it's a much better product than it used to be and the addition of e-Hybrid and PHEV tech to the range brings it into line with the way the segment is developing. With the four-wheel drive Plug-in model, there's more off-road prowess than you'd typically get in a car of this class but this still isn't in any way a Jeep for the wilds. Still, likely owners won't want Wrangler motoring. They want a more zeitgeist-orientated lifestyle SUV vibe that this Compass is now better equipped to deliver, even in front-driven form. A Jeep then. But not quite as we knew it.