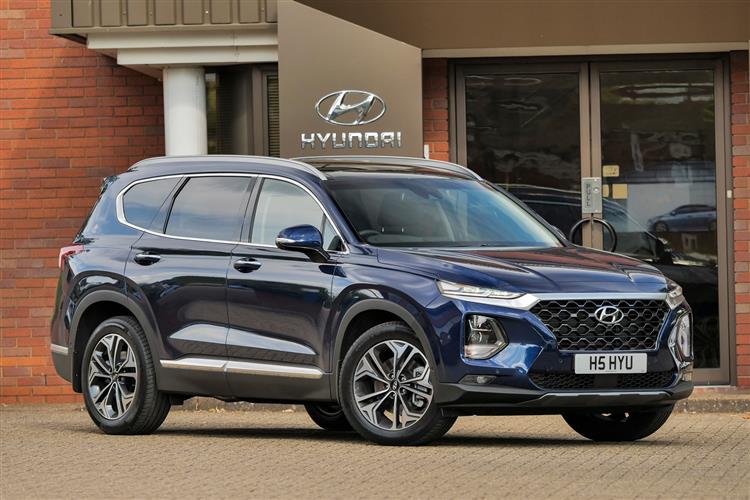 Think of Hyundai's Santa Fe, if you ever do, and you'll probably associate this large, 7-seat Korean SUV with a diesel engine. The sort of powerplant the brand has now consigned to history. Which might be confusing to you if you know this Asian manufacturer. Wasn't the fourth generation 'TM'-series Santa Fe, the model we have now, launched as recently as 2018 only with diesel power? Well yes it was. And yes, everything's changed. Either Hyundai has mis-read the market or its electrified engine tech wasn't quite ready but whatever the case, this MK4 design had to be fundamentally changed just two and a half years into its life cycle, reappearing in the Spring of 2021 in a form that could only be had with a 1.6-litre T-GDi electrified petrol engine. Either of the full-Hybrid HEV self-charging sort. Or with the PHEV Plug-in tech we look at here.

As the fairly rapid 8.8-second rest to 62mph time of this Plug-in variant illustrates, this PHEV Santa Fe feels like it has an engine of far bigger capacity than 1.6-litres beneath the bonnet. Even when it's running without the aid of combustion power, the car's 90PS electric motor does a reasonable job of powering it in battery motion mode. And when the 13.8kWh battery pack runs out of energy (which WLTP stats suggest will happen somewhere between 36 and 39 miles) and the 1.6-litre T-GDi turbo engine cuts in, the combined power output - 265PS - is more than enough for most safe overtakes, or pressing on when you're late for the school pick-up. You might wish for a bit more pulling power through the six speeds of the drivetrain's auto gearbox though; there's only 350Nm of it, which isn't a great deal to propel along a 2.1-tonne 7-seat family SUV. That's why towing capacity is limited to 1,500kgs. Hyundai has made sure that this car still retains a reasonably degree of 'off piste' capability though. Its standard 4WD system incorporates three bespoke 'Terrain' drive modes which you select from a provided dial - 'Snow', 'Mud' and 'Sand'. But there's not really enough ride height to venture anywhere too gnarly, so the 'Terrain' side of the drive mode dial will probably remain largely unused. More everyday useful settings come when a push of the same dial clicks you in to three separate tarmac 'Drive' modes that alter steering feel, throttle response and gear change timings. Most of the time, you'll leave the car in the 'Smart' setting, basically an auto mode that sorts everything out for you. There's also an 'Eco' mode. And a 'Sport' setting for when you want to push on, though you won't want to do that terribly often in this kind of high-sided SUV.

There are no outward giveaways as to this model's plug-in status, unless you happen to notice the badging or the extra filler flap. The latest version of the fourth generation Santa Fe isn't quite the sort of car that will have pedestrians bumbling slack-jawed into pavement furniture but it's undoubtedly a good looking thing. It has that inherent rightness to its proportioning that'll make it tricky not to throw a glance over your shoulder when you lock it and walk away. Most importantly, choose an upscale version and it looks - and there's not really a better word for it - expensive. That's exactly the desired result, as Hyundai is trying to push the Santa Fe upmarket. For this revised model, a number of exterior and interior enhancements have been introduced including a redesigned front end with a new cascading grille, T shaped headlamps and a sculpted front bumper. Rear design changes include new connected tail lamps, full length lower reflector and a redesigned bumper. And inside? Well cabin updates include a redesigned dashboard with a standard 10.25-inch infotainment system and optional 12.3-inch supervision instrument cluster screen. Interior space has been increased all around, width by +10mm, length by +15mm and height by +5mm. At the back, this revised Santa Fe boasts an increase of 34mm of 2nd row legroom over the previous model, giving this improved version an overall best in class 2nd row legroom of 1060mm. This enhanced Santa Fe also continues with a standard 7 seat interior - many D segment competitors only offer 5 seat configurations. As before, there isn't a huge amount of space in the third row (don't think of this as an alternative to a big MPV). Nevertheless, adults will be OK there provided the journey isn't too long and second row occupants can slide the mid bench forward a little. Luggage capacity across the range isn't much compromised by the PHEV installation, rated at 571-litres (seats up) and 1649-litres (seats down). That's a bit less than a comparable Kia Sorento.

If you're comparing the Plug-in Hybrid Santa Fe with its HEV self-charging Hybrid showroom stablemate, you'll find that this Plug-in variant's provision of a larger 90PS electric motor powered by a considerably larger 13.8kWh battery makes all the difference. It facilitates the usual PHEV three-figure combined economy reading - in this case 173.7mpg. And an enviro-conscious C02 figure of just 37g/km. Which in turn makes possible a super-low Benefit-in-Kind taxation rating of just 10%; with the HEV, it'd be 32-36%, depending on trim. A Santa Fe Plug-in Hybrid owner qualifies for a low VED tax band B, so there'll also be no VED road tax to pay in year one (the self-charging models are are in VED bands H or I). Servicing is every 10,000 miles. And insurance is rated at group 26E for 'Premium' trim or group 27E for a top 'Ultimate'-spec car, both ratings much lower than for an equivalent Kia Sorento. Let's finish with charging time figures; from a 3-pin 2.2kW supply, charging a Santa Fe PHEV from empty to 100% would take 5 hours and 2 minutes. Use a 3.3kW AC supply and that time drops to 3 hours and 25 minutes. A strong buying incentive, as usual with Hyundai, is the five year unlimited mileage warranty that comes as standard. It's backed up by breakdown cover that last the same length of time and free annual vehicle health checks over this duration. True, rival brand Kia claims to better this package by offering a similar seven year deal, but there, you're limited to 100,000 miles.

Hyundai must be wishing it hadn't missed the opportunity to build this kind of hybrid tech into this fourth generation Santa Fe from this 'TM'-series model's original launch back in 2018. That would have given the brand a real technological lead in this segment - even over its Kia Sorento close cousin, which wasn't ready for a new generation model back then. As it is, Hyundai has introduced its hybrid electrification - and specifically this Plug-in variant - at a time when many of the Santa Fe's major rivals in this class are announcing electrified engines too. And at a time when this car's development cousin, the Kia Sorento, has been launched in a fourth generation form able to accept exactly the same engine technology. For all these reasons, there's every chance of this Santa Fe Plug-in Hybrid model's appeal getting crowded out by segment noise and potential customers missing just what a very complete package this car really is. And that would be a pity because you could make an argument for segment leadership here - though that would be easier if the price sticker wasn't so high. The fact is though that this Santa Fe has a classier look and feel than its only slightly cheaper identically-engineered Kia Sorento class cousin. And rival PHEV segment models from other brands generally cost more. You could easily pay as much for a contender in this class with merely a mild hybrid engine - and that would deliver hardly any of the environmental or tax benefits you get here. So be among the few who won't ignore this car and try it. You'll thank us in the long run.