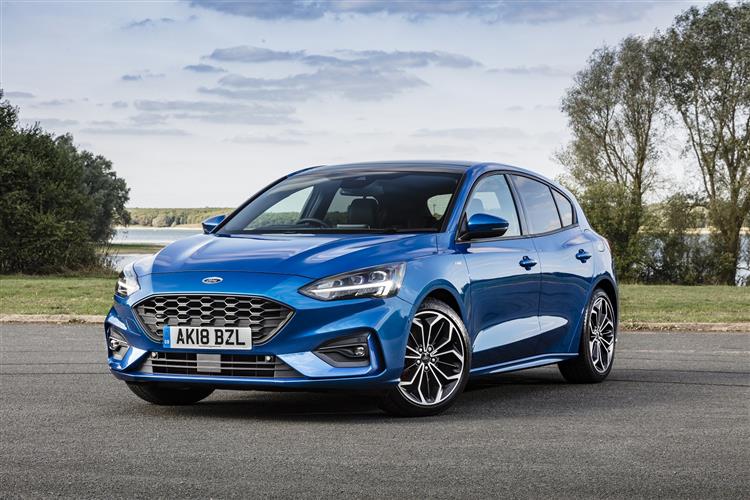 Much is expected from this fourth generation Ford Focus. Designed from a clean sheet of paper, it looks set to give its rivals plenty to think about. Jonathan Crouch takes a look.

It's very difficult to over-state the importance of the Focus family hatch to Ford's European business. To understand its significance, press the rewind button for a moment and shuttle back to 1997. Ford's family hatch contender during this period was the fifth generation Escort, a car so all-encompassingly woeful that the brand was almost embarrassed to sell it. When the time came for a replacement, we all expected something better. What we got in the Focus model first launched in 1998 was something much, much more than that, a car that, at a stroke, offered arguably the biggest step forward in family car design the market has ever seen. Here at last was technology directed firmly at the man in the street who, in this apparently humble family hatchback, could experience a car more entertaining and rewarding to drive than almost anything this side of a sizeable lottery win. It was asking a lot for the MK2 model we saw in 2005 to repeat such a seismic step forward but that second generation Focus was still quite good enough to remain acclaimed as the driver's choice against rival Astras and Golfs that made up for their dynamic failings with a better ride and a more luxurious big car feel. These were attributes the Focus also needed and when it came to developing the MK3 version, launched early in 2011, Ford tried to provide them without compromising the car's class-leading handling. That's also been the goal with this more sophisticated MK4 model, announced in the Spring of 2018.

Our test of this fourth generation Focus confirmed that the sharp driving dynamics that marked out previous models have been retained. That's aided by the standard inclusion of a driving modes system this time round with settings that can alter steering feel, throttle response and, if you've an auto variant, transmission response times. Talking of autos, there's a new 8-speed self-shifter on offer. Otherwise, you'll be swapping cogs with a 6-speed manual. The engine range initially looks familiar, but closer inspection reveals that it's been heavily revised. As before, the range primarily hinges around Ford's familiar three cylinder 1.0-litre EcoBoost petrol unit, which gets a new turbocharger and cylinder head and is available in standard 125PS guise, plus it can also be had in mHEV mild hybrid form in 125 and 155PS forms. There's also a 1.5-litre EcoBoost petrol engine with 150 or 182PS. Plus a fresh 1.5-litre EcoBlue diesel with 95 and 120PS. And a 2.0-litre EcoBlue unit with 150PS. As for the suspension, well a little disappointingly, Ford has followed Volkswagen's lead in equipping lower-powered 1.0-litre petrol and 1.5-litre diesel Hatch variants with a cruder twist-beam set-up. If you want the more sophisticated independent rear double wishbone suspension system that's supposed to improve ride comfort, you'll need an estate, the 'Active' crossover version, top-spec 'Vignale' trim or a hatch with 1.5-litre petrol or 2.0-litre diesel power. The top 'ST' high performance version gets stiffer, lowered suspension and a choice of either 280PS 2.3-litre EcoBoost petrol power or a 190PS version of the 2.0 EcoBlue diesel engine.

There's nothing particularly striking about the way this fourth generation Focus looks but the lines are crisp and pleasing, whether you opt for the five-door hatch body style or the alternative small estate. The overall length is 18mm longer than before and the car rides 15mm lower. Or at least it does in standard guise. The SUV-style 'Active' variant has a slightly higher ride height; the sporty 'ST-Line' model rides slightly lower than normal versions. As ever though, what's more important is the stuff you can't see: this Focus rides on the brand's latest 'C2' platform, which enables the wheelbase to be 53mm longer, freeing up extra cabin space. You should certainly feel that inside. Rear knee room has increased by 56mm and, thanks to a re-profiling of the rear doors, the rear passengers' heads are now adjacent to glass rather than metal, so they'll be able to see out more easily. Up-front, as you'd expect, it all feels of much higher quality - the fascia now has half the number of buttons that were there before. And shoulder room is class-leading. The extra body length has freed up more boot space too. In the estate version, there's now a class-leading 1.14m of width between the wheel arches and overall load length with the rear seats folded (1,700mm) is up by 134mm. That means 1,650-litres of carriage capacity.

The Focus range kicks off with the base 'Zetec Edition' variant priced at around £22,000, before progressing through 'ST-Line Edition', 'ST-Line X Edition', 'Titanium Edition', 'Titanium X Edition' and 'Vignale' variants. An SUV-style 'Active Edition' version (with an 'X'-spec option) and an 'ST' hot hatch are also available. Equipment levels reflect the fact that most customers will be paying upwards of £20,000 for this once very affordable family hatch. Even the base Focus 'Zetec' comes as standard with 16-inch alloy wheels, air conditioning, along with an 8-inch SYNC3 touchscreen incorporating a DAB digital radio with Bluetooth and Emergency Assist. Plus there's an electronic parking brake, autonomous emergency braking, tyre pressure monitoring, Hill Start Assist and a Lane-Keeping Aid. If you prioritise luxury and you've a healthy budget, you'll like the top 'Vignale' variant, which gets a unique front grille and body styling with 18in wheels, full LED lighting, leather upholstery, a head-up display, a rear view camera, a heated steering wheel and the 675-watt 10-speaker B&O Play Premium Audio System. For sporty drivers, the 'ST-Line' variant offers unique body styling, including unique upper and lower grille, rear spoiler and polished twin tailpipes. Inside there's a flat-bottomed steering wheel, black headlining, an aluminium gear knob, alloy finish pedals and red stitching. Sophisticated features available across the range include a head-up display, radar-operated cruise control, a more advanced Park Assist system and a wi-fi network that will connect up to 10 devices.

Ford has re-fettled its engines in pursuit of greater efficiency. The 1.0-litre EcoBoost petrol unit gets a higher compression ratio and increased injection pressure to facilitate this. In mHEV mild hybrid form, this unit gets a lower compression ratio and a larger turbo. And the mHEV version has been embellished by a beefed-up starter/generator driven by a belt at the front of the engine that stores the energy harvested when you brake or decelerate in a tiny 48-volt lithium-ion battery secreted at the back of the car. Across the range, it'll also help that this MK4 model Focus can be up to 88kg lighter than its predecessor. Around 33kgs of that comes from the new C2 platform, which uses a higher proportion of high-strength steel. A further 17kg of weight has been taken out of the interior, the powertrain is around 6kgs lighter and the electrical system loses 7kgs of weight too. A standard 'Active Grille Shutter' closes a flap in the front gill to reduce drag at speed. Plus there's clever 'Air Curtain' technology that guides airflow across the front wheels in a way that reduces turbulence. The result of all this effort is, according to Ford, a 10% improvement in running cost efficiency across the board. Specifically, on the volume 1.0-litre EcoBoost petrol models, that means a CO2 emissions figure which can be as low as 116g/km, regardless of your choice between 100 or 125PS versions of this powerplant. Combined cycle fuel economy for the 125PS 1.0T petrol unit it 55.4mpg. The 1.5-litre EcoBoost petrol unit can put out as little as 142g/km. As for the 1.5-litre EcoBlue diesel, well in 95PS form, this unit produces 119g/km of CO2. Choose the 2.0-litre EcoBlue diesel unit and the CO2 figure is 125g/km.

Has any car had more of an impact on modern era motoring than the Ford Focus? With over 16 million global sales on the board, it's hard to argue the point. Other manufacturers can better this car in some regards, but they still can't make their family hatchback contenders drive like a Focus. True, this car is still far from perfect. There are cheaper rivals - and there are certainly more spacious ones. As an overall package though, it remains hard to beat. This car no longer depends solely on handling supremacy to justify its position at the top of the sales charts. Smarter and more sensible, it is, more than ever, number one for a reason.