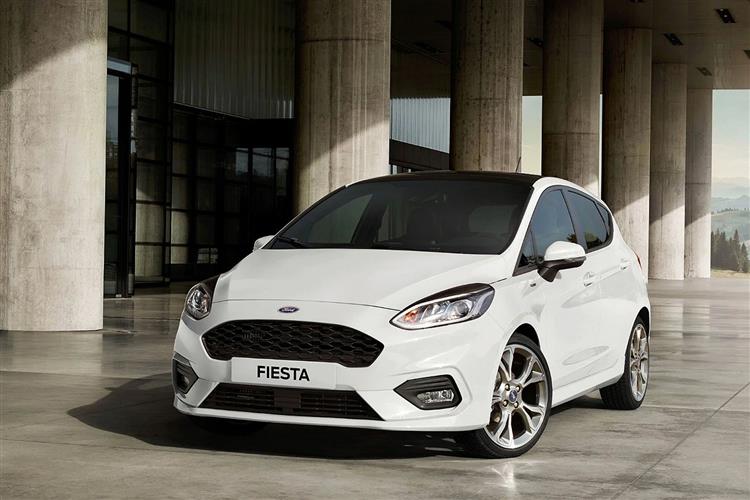 The seventh generation Ford Fiesta has come of age. Jonathan Crouch drives the much improved version.

This Fiesta may still be a small car but these days, it thinks big in almost every way, starting with styling designed to make more of a statement in the supermini segment. Under the bonnet lies an impressively clean and frugal range of petrol and diesel units, highlighted by the three cylinder 1.0-litre Ecoboost unit already seen in the larger B-Max and Focus models, the world's cleverest conventional petrol powerplant, Plus there's a more up-market cabin, safety technology that can brake the car for you and call for help in an accident and even a clever MyKey device to give parents greater control over young drivers who might be using this car. This is, in short, on paper at least, a thoroughly well thought out piece of supermini design. But will it be enough to keep Ford at the top of the sales charts? Let's find out.

Variations on the Fiesta theme may come and go but before driving any version of Ford's definitive supermini, there's one thing you almost always know for certain: that it'll be a great steer. There's a deftness to the way this car responds, an agility to the way it nips around the bends that no other small car can quite match. It does help though to avoid the poverty 1.25-litre 60 and 82PS petrol engines at the bottom of the line-up. These are old-tech units but get beyond them and things are far more state-of-the-art with the heart of the range based around an award winning three cylinder 1.0-litre unit offered in a trio of different guises. Most affordable is a normally aspirated 80PS 1.0 Ti-VCT unit but it's rather slow and only a few hundred pounds less than the version of this 1.0-litre engine I'd really point you towards - the 100PS turbocharged EcoBoost unit. It's also offered with 125PS, but only in the pricier trim levels. No, the 100PS variant is all you really need, spiriting you to sixty in 11.2s to the accompaniment of a buzzy but not unpleasant three cylinder thrum. There are other petrol options in this Fiesta line-up - but they're minority interest 1.6-litre options. An older 105PS unit that only comes with the Powershift twin-clutch automatic transmission that's mainly there for older buyers. And, at the other extreme, the 180PS 1.6-litre EcoBoost turbo powerplant for the hot hatch ST shopping rocket model. That only leaves the 75PS 1.5 and 95PS 1.6-litre TDCi diesel units, engines you're really going to have to want to choose them over the EcoBoost petrol powerplants.

If you go by the maxim that if something looks right, it is right, then you'll probably like this improved version of the seventh generation Fiesta. As before, it's offered in both three and five-door bodystyles and both are tidy pieces of styling with a look now dominated by this massive Aston Martin-like trapezoidal five-bar chrome front grille that's bracketed by a smarter set of laser-cut headlamps with LED daytime running lights. The bonnet also has a more aggressive 'power dome' shape Inside, the twin-cowled instrument cluster and boldly jutting centre console with its winged mobile 'phone-inspired layout for the minor controls remains but Ford has not been able to resist the temptation to do a bit of tidying up, relocating the interior door handles and the switches for the electric windows and heated seats. Though a few areas of low rent plastic can still be found, overall, it's now a much smarter cabin, with a high-gloss finish for the upper instrument panel that flows to the lower centre console and is replicated in the door panels. If you're going to be using the back seats regularly, opt for the five-door version: in the three-door, the windows are small and set high up, so light isn't abundant. Either way though, you might be surprised at the space available: even a couple of six-footers should be reasonably happy here. Lift the tailgate and you'll find that as before, there's 276-litres on offer with the seats up and 960-litres with the seats folded flat.

Like most superminis, this Fiesta sells in the £10,000 to £18,000 bracket - and there's a pretty typical £600 premium if you want to progress from the three-door to the five-door bodystyle. The line-up is propped up by the old 1.25-litre petrol unit, offered with either 60 or 82PS. To get beyond these and get yourself one of the clever new 1.0-litre petrol engines or the base 1.5-litre TDCi diesel, you need a slightly plusher trim level. And that means you'll need to have somewhere between £13,000 to £14,000 to spend, depending on the model you're looking at. In terms of the 1.0-litre petrol powerplants, the 100PS Ecoboost is well worth the £500 premium over the 80PS unit. While if you're looking for a diesel, it's worth considering the £1,200 premium to go from the 75PS 1.5-litre TDCi to a 95PS 1.6-litre TDCi variant that features more frugal ECOnetic technology. Whichever flavour of Fiesta you choose, equipment runs to a six-speaker stereo with aux-in and USB compatibility, front electric windows, power mirrors, body-coloured bumpers, 60/40 split-folding rear seats and headlamps that stay on at night to guide you to your front door. One intriguing innovation is MyKey, a segment-first technology feature that allows parents to pre-programme a maximum speed and even the stereo volume if they lend the car to a young driver or a friend. Another interesting innovation is SYNC, an in-car connectivity system that features Emergency Assistance in an accident. Plus there's the optional Active City Stop system that at speeds of under 20mph, uses a radar system mounted in the top of the windscreen to constantly scan the road ahead for potential collision hazards.

The Ford Fiesta has garnered a reputation for being one of the cheapest superminis to run and this continues. In fact what's remarkable about this improved range is how so many models go below 100g/km. It's now the exception where you find a variant in this line-up that puts out more than the ton, especially as you ascend the range and leave the older engines behind. The 1.5 TDCi 75PS, the 1.6 TDCi 95PS and all versions of the 1.0-litre engine all fall below 100g/km. The ECOnetic version of the 1.6-litre diesel registers just 87g/km and a combined economy figure of 85.7mpg thanks to a Start/Stop system that cuts the engine when you don't need it, stuck in traffic or waiting at the lights. Even the pokiest variant, the 180PS 1.6-litre petrol Fiesta ST hot hatch, manages 139g/km of CO2. Perhaps the cleverest powerplant of the lot is the three cylinder 1.0-litre Ecoboost petrol unit. Whether you order it in 100 or 125PS form, it also offers Start/Stop, helping towards a stellar 65.7mpg return on the combined cycle and the registering of a 99g/km of CO2 figure that means free road tax and no London congestion charge. For me, it's a better choice than the comparably priced - and much slower - 1.5-litre TDCi 75PS diesel variant (which manages 76.3mpg and 98g/km).

The Ford Fiesta has always been a vehicle the British public has warmed to but the truth is that before this seventh generation model arrived, supermini buyers chose this car either because it was great to drive or because they'd been offered a deal too good to turn down: there wasn't really another reason to buy one. This model changed all that - and this one takes things a step further still, smarter to look at, smarter to sit in, smarter to operate and, perhaps most importantly, smarter under the bonnet. A smarter choice all round then? Many will think so. This may not be the largest or the plushest car in the supermini sector but on just about every other main criteria, it's either up there or class-leading. There's an unpretentious quality to it and a focus on providing the things that really matter to small car buyers - the fun handling and affordable asking price Ford has long delivered to them in this segment but also the low running costs, strong safety provision and low emissions they now need too. And it's all been done with a polish and self belief that we've never seen from a Fiesta before. In short, this is, more than ever, a small car that supermini buyers simply can't ignore.