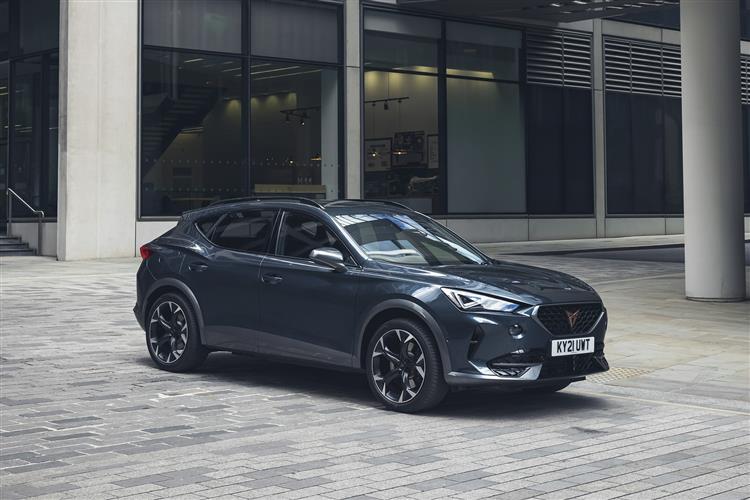 We like the CUPRA Formentor. But will it be as appealing in e-Hybrid PHEV form? Jonathan Crouch takes a look.

You'll might possibly know the 'CUPRA' brand name, but probably only as a sporty trim designation dating all the way back to 1996 and used on a whole string of SEAT Ibiza and Leon hot hatches. Now, parent company SEAT wants CUPRA to mean more, creating, in its words, 'a range of unique, sophisticated performance models designed to captivate car enthusiasts'. The CUPRA Formentor was the first of them and it's arguably at its most interesting in this e-Hybrid PHEV guise. The Spanish CUPRA nameplate, a pormanteau word encompassing 'Cup' and 'Racing', has actually been a separate marque within the Volkswagen Group since 2018, but its first products were merely sporty versions of existing SEAT models, first the rather underwhelming CUPRA Ateca, then more recently the CUPRA Leon. This Formentor, in contrast, is this marque's first stand-alone model, the first of several designs that will, the VW conglomerate hopes, make this brand a kind of Iberian Alfa Romeo - the kind of thing SEAT was always supposed to be but never really was. But can those kinds of ambitions be realised with the extra weight and complexity of a PHEV system on board?

Rather curiously, none of the Formentor's conventional powertrain options incorporate the Volkswagen Group's latest mild hybrid technology. For any kind of engine electrification at all in this CUPRA, you've to stretch to an e-Hybrid variant which offers plug-in hybrid tech, only available with front wheel drive. As with the CUPRA Leon e-Hybrid, what you get here is a tried and tested VW Group PHEV package, though in the Formentor, it comes in a de-tuned 204PS guise as well as in Golf GTE-style 245PS form. Either way, a 150PS 1.4-litre TSI petrol engine is mated to a 6-speed DSG auto gearbox and an 85kW electric motor powered by a 13kWh lithium-ion battery with a WLTP-rated all-electric driving range quoted at 34 miles. Which of course you won't get anywhere near if you explore the quoted all-electric top speed of 80mph or start trying to throw the thing around too much (an extra kerb weight addition of up to 60kgs over a conventionally-engined Formentor discourages you from doing that anyway). Try and stretch to the 245PS e-Hybrid variant if you can, which gets torque boosted from 350 to 400Nm without any detriment to driving range, improving the 0-62mph time from 7.8s to 7 seconds dead.

There are no significant visual changes differentiating this e-Hybrid variant from other Formentors. So, like its showroom stablemates, this one sits a little lower than most other performance SUVs and Crossovers. Size-wise, the Formentor's 4.5-metre length is a fraction longer than the CUPRA Ateca but the swept-back SUV Coupe-style roofline is 100mm lower, which in combination with the set-back passenger cell, gives the silhouette something of the look of a high-riding estate. Inside, the designers have been able to fashion a bespoke dashboard, which appears to float, an impression created by the horizontal full-LED wraparound ambient lighting strip which changes colour with drive mode selection and safety functions and runs the width of the fascia, flowing into both front doors. You sit quite low for a crossover on brilliantly supportive seats that above entry-level trim will be upholstered in Nappa leather and which feature copper-coloured embellishment; the same kind of thing you'll also find on the prominent centre vents, as well as on the door cards and the steering wheel. Through the wheel, you view a 10.3-inch 'Digital Cockpit' instrument display, differentiated from the one used in a humbler SEAT Leon by a redesigned graphics, though the screen's customisable functionality's exactly the same. Anything you can't find here - and much that you can - will feature on the big 12-inch infotainment touchscreen, which forms the centrepiece of the dashboard. In the back, despite the coupe-SUV styling, headroom is fine in that regard unless your occupants are of basketball-playing stature. Boot space with this PHEV variant falls to 345-litres (down from 420-litres with the 2.0-litre TSI model); with the seats folded, the e-Hybrid's total capacity is 1,370-litres.

At the time of this test in Spring 2021, the Formentor e-Hybrid was priced in 'V1' 204PS form from around £36,000 and in 'VZ1' 245PS guise from just under £39,000. In terms of Coupe-SUV Plug-in Hybrid rivals, well yes, against the 204PS Formentor variant, you could conceivably consider Kia's XCeed PHEV at around £30,000, but that uses a slightly less powerful engine with a smaller battery. Otherwise, because Toyota doesn't do a plug-in version of their C-HR (you can't get a PHEV version of sister brand Lexus' UX crossover either), your next class option would see you needing to stretch right up to around £40,000 for BMW's smaller X2 xDrive 25e (though that car admittedly does have 4WD). If you're looking at an outlay of around £39,000 upwards on a more powerful Formentor e-Hybrid VZ 245PS model, then you'll be interested to know that an Audi Q3 Sportback 45TFSIe with the same engine costs considerably more. And that the cheapest Range Rover Evoque P300e is close to £45,000. Mercedes' GLC Coupe Plug-in models only come with diesel power. BMW doesn't offer this tech on the X4 at all. And the cheapest Audi Q5 Sportback TFSIe model costs from around £53,000.

Both Formentor e-Hybrid derivatives boast a WLTP-rated all-electric driving range of up to 34 miles. Of course, in deciding the budgetary case for this PHEV CUPRA, you will of course need to factor in charging costs, but if you get your charging regime right on off-peak electricity that'll hopefully cost pennies rather than pounds to consume, these bills shouldn't be too great. The combined range of the petrol and electric motor is around 660 miles, making a plug-in Formentor an ideal comfortable car for the really long journeys that would probably defeat full-EV Crossovers in this class like, say, a Lexus UX 300e or a BMW iX3 - or CUPRA's own Born EV. And the electrified version of this CUPRA will charge much quicker than a full-EV: powering a PHEV Formentor up from a domestic socket would take around five hours, but using a garage wallbox, you'll be able to reduce your charging time period to around three and a half hours. Bear in mind that only a single Mode 3 charging cable is included as standard. The quoted WLTP combined cycle fuel return for a Formentor e-HYBRID 204PS model is up to 235.4mpg. For the 'VZ' 245PS e-Hybrid variant, it's up to 188.3mpg. And the CO2 reading that'll see your BiK tax payments rated at just 11% is an impressive 27g/km; that's for the 204PS version - for the 245PS variant, it's 33g/km. These are pie-in-the-sky figures of course. If you don't charge your Formentor e-Hybrid much and use a little of throttle, you'll be burning plenty of fuel - and possibly getting through quite a few sets of front tyres too.

CUPRA has tried to do something quite difficult here. Namely, take a lot of existing mechanicals and create something genuinely interesting and different from them, a particularly hard job in a market already awash with crossover clones. But, with this Formentor, they've very nearly managed it. And this car certainly adds up in e-Hybrid guise. It looks distinctive, it drives well and the cabin is classily trimmed - lighting up beautifully at night. Plus there's all the kudos of owning a performance brand none of your friends will have heard of, yet a car with a completely proven set of underpinnings which in the case of this PHEV, promise the prospect of rare filling station visits. The e-Hybrid hardware adds a bit of extra weight, but unless you're really throwing the thing around, you won't really notice that. What you will notice is that this car has real character and identity. With this car, the whole 'Iberian Alfa Romeo' thing finally starts to make some sort of sense.