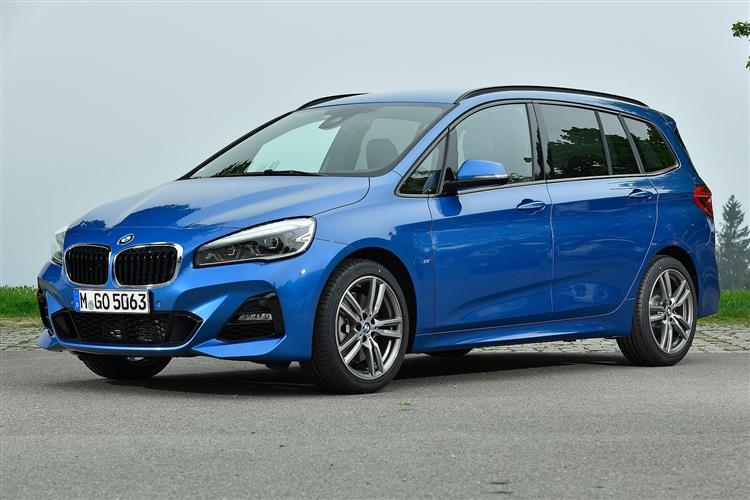 Traditional thinking has always assumed that buyers in search of a compact seven-seat MPV wouldn't be interested in a premium brand. In 2015 though, BMW decided that traditional thinking needed a bit of a shake-up - and brought us this car, the 2 Series Gran Tourer. As you might gather from the looks, it's a lengthened, more versatile version of the company's five-seat 2 Series Active Tourer, a model which was not only BMW's first MPV but also the first to break away from the rear wheel drive configuration that had previously defined the Bavarian maker. In one sense, this is what BMW calls a 'retention car', there to keep buyers loyal who would otherwise be forced to desert the brand to meet the needs of a growing family. But it's also there to attract customers who might never before have had the opportunity to buy a BMW: prior to the original launch of this model, the brand had, after all, never previously sold a model offered as standard with seven seats. Now, it's been improved with more efficient engines, smarter looks and better media connectivity.

It probably won't come as any great surprise that the 2 Series Gran Tourer features most of the same engines that the 2 Series Active Tourer uses. They're all cleverly spun off the same modular base, the opener being the 140hp 1.5-litre three-cylinder 218i, which will scuttle to 62mph in 9.5 seconds. Graduate to the 2.0-litre four-cylinder turbo engine in the 220i and you're looking at 192hp, which translates to 62mph disappearing in less than eight seconds. There's a trio of diesels, starting with the 116hp 216d, while the 150hp 218d is the best seller. At the top of the range is the 220d xDrive version, sending its 190hp to the front or to all four wheels, depending on whether or not you pay extra for the xDrive option. It's just as quick to 62mph as the 220i. Power on mainstream variants is sent to the front wheels via a six-speed manual gearbox; as an option, BMW offers a seven-speed Steptronic transmission for the three-cylinder engines, while the four-cylinder motors can be coupled with an eight-speed Steptronic transmission (standard in the BMW 220d xDrive Gran Tourer). The 10-millimetre-lower M Sport suspension is standard on the M Sport trim and also available as a separate option. As an alternative, drivers can choose a chassis with Dynamic Damper Control: using the Driving Experience Control switch, two different damping settings are available.

BMW has tried to liven up the look of this revised version a little with a larger front kidney grille, redesigned front fog lamps, smarter wheel designs and twin tail pipes on all four cylinder variants. Otherwise, it's as you were. The longer wheelbase of the 2 Series Gran Tourer affords a little more elegance of line to its profile. All in, it's 214mm longer than the five-seat car and actually sits 53mm higher. The longer wheelbase of 2,780mm provides a decent slug of interior space and the elevated roofline affords respectable headroom in the back as well as making the car easier to get in and out of. Three child seats can be mounted in the second row, and a further two can be fitted in the third row. The second row seat slides fore and aft by 130mm, depending on whether you're prioritising legroom or luggage space. The backrest also reclines a few degrees. If maximum stowage space is required, the 40:20:40-split rear seat backrest can be remotely unlocked by pressing a button in the boot, then folded down to create an almost level cargo floor. The front passenger backrest can also be lowered to allow long objects up to 2.6m in length to be transported. The tailgate can be opened and closed automatically by push button operation or, optionally, via one of those sensors that has you hopping about waving your foot under the bumper.

Prices aren't too ambitious, typically being just over £2,000 above those of an equivalent five seat 2 Series Active Tourer model. This means that the range opens at just under £27,000 for the 218i and runs to around £33,500 for the top 220d xDrive variant, which comes with the option of xDrive 4WD for £1,500 more. A 7-speed Steptronic auto 'box is optional with the three cylinder engines, while an 8-speed Steptronic auto is offered either as an option or as standard on the high-torque powerplants, depending on the variant you're looking at. If safety's a priority, you'll want to look at the optional 'Driving Assistant Plus' package. This includes 'Active Cruise Control' and a 'Traffic Jam Assistant' that, in heavy traffic, is able to control the car's speed, steer automatically and keep it in its lane. Also available is Lane Departure Warning and the City Braking function, which applies the brakes automatically at speeds up to 37mph in response to an imminent collision with a car, motorcycle or pedestrian, for instance. The Parking Assistant takes care of manoeuvring into parking spots that are either parallel or perpendicular to the road, while its ultrasonic sensors also help to search for suitable spaces up to a speed of 22mph.

Let's talk about the 218d Gran Tourer for a moment, because this looks to be the sweet spot in the model range when price, performance and economy are taken into account. Here, you get a seven seater that'll dip under ten seconds to 62mph quite comfortably, yet will return 61.4mpg on the combined cycle. True, it probably won't approach that number when you're seven-up, but the CO2 emissions of 121g/km will engender a rosy glow when you come to tax the thing. The 1.5-litre turbo petrol engine that many customers will inevitably gravitate to in the 218i variant makes some extremely good numbers, recording 47.1mpg on the combined fuel economy cycle and 137g/km. Economy figures that good make you wonder why you'd pay extra for the diesel but the additional torque of the 216d will prove a draw for many and 64.2mpg combined cycle economy (116g/km of CO2) isn't going to put too huge a dent in the family budget. The usual suite of BMW EfficientDynamics energy-saving features is responsible for making those vaguely implausible looking figures, including Auto Start Stop and ECO PRO. When in ECO PRO mode, the throttle response is adjusted to encourage a more economical driving style. The extra economy created in that ECO PRO setting is fed back to the driver, with the in-car displays showing the additional number of miles achieved.

Ultimately, this car is all about the democratisation of premium quality. Why should you be denied a prestige badge just because you've a growing family and need seven seats? With a 2 Series Gran Tourer, you don't have to be. OK, it's probably not the BMW you ideally wanted back in your college years but today, it may well be the one you actually need. Certainly if compromises have to be made to suit changes in your life, then this car represents a remarkably pleasant way of making them, creating an MPV you could want from the kind of one you might merely need. There's something to be said for that. Life happens - but there's no reason why you can't better enjoy the journey.