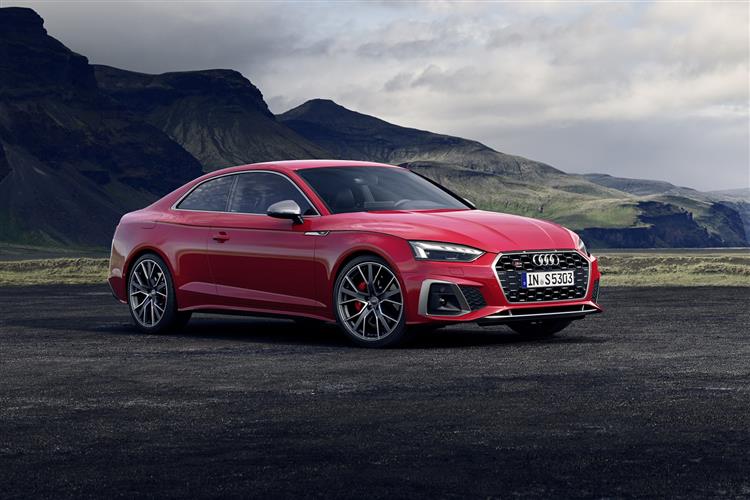 Audi's growing reputation as a maker of truly sporting cars continues on apace. For proof, we could have chosen an R8 supercar, an S4 super saloon or a TT RS roadster. But instead, we've got this car, the very fast, very focused and, in its own way, really rather frugal S5 Coupe. It's a model we could have tried as a two-door Cabriolet or a more practical five-door Sportback but instead, we've opted to pitch this car at you in desirable Coupe form. It's a bodystyle that not only looks great but also works particularly well in a current form that now features a potent turbocharged mild hybrid 3.0-litre TDI six cylinder diesel with 347PS plumbed in beneath the bonnet. It's actually a potentially addictive package.

At the wheel of a model like this, you can see why Audi has in recent times achieved so much, so quickly. It's not perfect (the steering for example, could be sharper) but overall, let us try and define for you just why this car works as well as it does - starting with the engine. Ignoring the current zeitgeist, Audi has switched this S5 Coupe into diesel power, installing a mild hybrid 3.0-litre TDI unit that produces 347PS and 700Nm of pulling power, good enough to get this car from rest to 62mph in just 4.8s, which is only a tenth slower than the previous 3.0-litre TFSI V6 petrol unit could manage. Top speed, as before, is artificially pegged at 155mph. The engine utilises a large turbo, which is partly driven by a little electric compressor, as well as exhaust gases. Audi claims that this set-up minimises the effects of turbo lag, with the system being automatically activated whenever the requested engine load exceeds the capabilities of the turbocharger. To go with this change of engine, Audi has upgraded this car in a number of other areas, adding in Progressive steering, refining the sports suspension and incorporating a revised chassis platform, which controls the car's quattro 4WD system. The transmission remains an 8-speed Tiptronic auto unit, but this set-up's impressively quick-reacting and smooth. Not so good is the lowered 'S' Sports suspension, which will be rather over-firm for some, though you can improve it by paying extra for a 'CDC' 'Continuous Damper Control' system that can be tweaked via the settings of the standard 'drive select' driving dynamics system. As well as also altering steering weight, throttle response and stability control thresholds, the 'drive select' modes can also influence the optional 'Quattro Sport differential' system, which constantly varies the amount of drive to each of the rear wheels for extra cornering traction.

You'll need a budget not far off £50,000 for this S5 in Coupe form. That's similar sort of money to that you'd have to find for rivals like the Mercedes-AMG C43 4MATIC and BMW's 440i M Sport, but of course they're petrol-powered. On S5 models, a sport differential can complement the quattro drivetrain for more targeted torque distribution to the rear wheels, improving stability and agility in fast corners. Naturally, the most forward-thinking technological advancements now supplement the already extensive standard equipment list, from the Audi virtual cockpit and Matrix LED lights to a head-up display and Bang & Olufsen 3D sound system. In terms of driver assistance, adaptive cruise control with Stop&Go incorporates a traffic jam assist function capable of taking over braking, acceleration and steering inputs at speeds of up to 37mph to take the strain off stop-start traffic. Audi is particularly proud of its media connectivity, specifically the 'connect' system that can link to the Internet via the ultrafast LTE network.With the standard Audi smartphone interface, Apple Car Play and Android Auto bring the familiar smartphone environment to the car, if desired. The optional Audiphonebox with wireless charging in the centre armrest uses near-field coupling to link smartphones wirelessly to the vehicle's antenna.

This S5's new mild-hybrid diesel engine uses a 48-volt belt-driven alternator starter, a 0.5kWh lithium-ion battery pack and an energy recuperation system. Audi claims exemplary fuel economy, thanks to a revised engine control unit which shuts off the combustion engine when coasting at speeds between 34mph and 99mph. The engine management system decides in every situation whether coasting, freewheeling or recuperation (the recovery of kinetic energy), is most efficient. It does this using information from the navigation system and the onboard sensors. The energy recovered by the water-cooled belt alternator starter during coasting and braking flows into the 48-volt storage unit or directly to the electrical consumers. When the driver presses the accelerator pedal again after a coasting phase or a stop, the water-cooled belt alternator starter restarts the combustion engine. The system does this as required by the driver's wishes and the situation, from very smoothly to very quickly. Start-stop operation begins at 13mph. When stopped, the engine restarts as soon as the car in front starts to move, even if the brake is depressed. We'll finish by covering the warranty. Most cars in this class get three years of cover, but whereas rival brands BMW and Mercedes don't limit your mileage in this period, Audi rather meanly restricts you to 60,000 miles. Optional extra-cost packages can extend the cover to either four or five years.

You could drive an S5 for the whole of its motoring life without suspecting the beast that lies beneath its bodywork. Some owners will - and that's a pity for this Audi's split personality can also promise a remarkably agile driver's car. True, it isn't quite as track-focused as a BMW M3, but then, it isn't as expensive to buy and this revised model's diesel engine makes it of course vastly more affordable to run than that Munich model. As an ownership proposition, this Audi's quite simply a more complete choice that sounds great, looks brilliant and is quite beautifully engineered. Audi's S badge always delivered a special experience. Now it's a properly sporting one too.