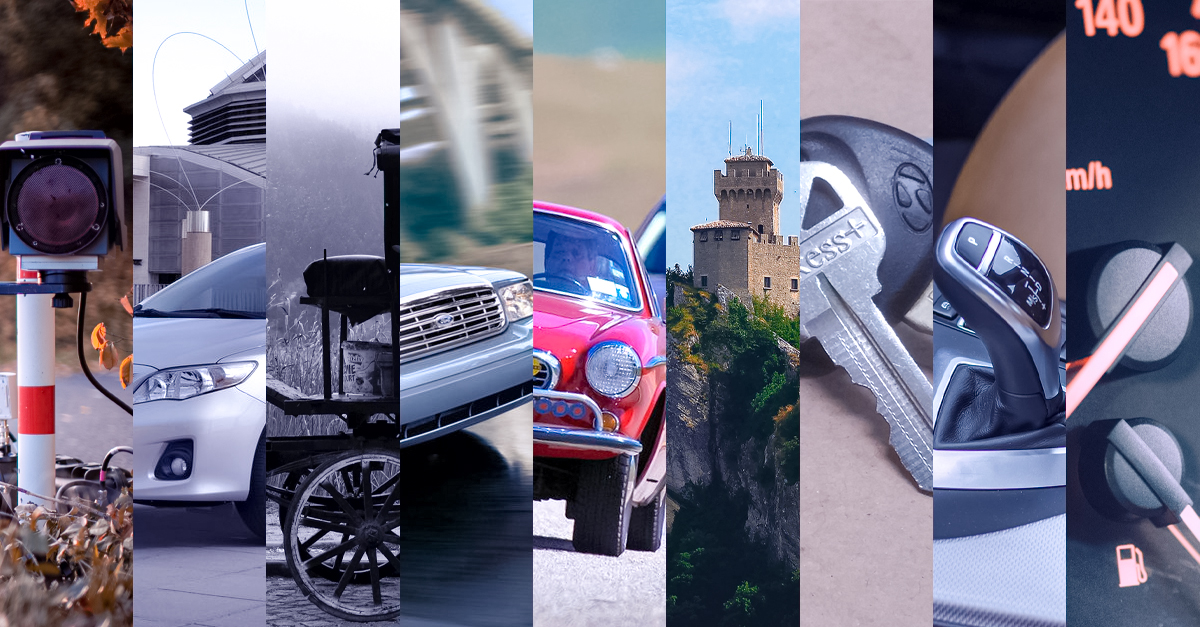 Do you know any of these facts about cars?

The first person charged with a speeding offence was in 1896

Walter Arnold was fined when he was caught breaking the speed limit travelling at 8mph in Paddock Wood, Kent. He was chased down by a police officer on a bicycle where he was then charged for breaking the law on four counts.

The Toyota Corolla is the best-selling car of all time

It is estimated that Toyota have sold around 45 million units of the Corolla since its debut in 1966. Its popularity lies in its worldwide availability, its affordability and its efficiency. The Corolla is followed in all-time sales by the Ford F-Series, Volkswagen Golf and Volkswagen Beetle.

The word ‘dashboard’ originates from the wooden barrier that was fixed to the front of a horse-drawn carriage to protect the driver from mud that’d be kicked up by the horse's hooves as they ran.

In 1938 the Mercedes-Benz W125 set the world record of travelling 268.8mph over a flying km on a public road. This record lasted almost 80 years until the Koenigsegg Agera RS surpassed it in 2017.

The world record was set by Irvin Gordon on his 1966 Volvo 1800S. Irvin would drive on a daily basis and would cover around 100,000 miles per year. His total mileage is equivalent of nearly 120 complete circumnavigations of the planet.

San Marino has the most cars per 1,000 people in the world

There are roughly 1.2 cars per person in San Marino. With only around 140 miles of road, many of the people in San Marino are passionate about classic cars.

This has to do with the fluid in your skull. The electromagnetic waves from the fob pass through the water molecules in your head causing them to radiate energy at the same frequency as the original signal. This combination amplifies the range of the signal.

A Swedish man holds the record for the most expensive speeding fine when he was caught driving 180mph in a 72mph zone in Switzerland. Under Swiss laws, fines are determined by the speed and the wealth of the driver. The fine totalled around £656,000 and his Mercedes SLS AMG was impounded too.

35% of the world's population drive on the left

Most of the countries that drive on the left are islands such as Britain, Japan and Australia and don't border right-sided nations. However exceptions like Thailand or Macau have had to come up with their own ways of switching cars over to the left as they pass over their borders.

The inventor of the cruise control was blind

Ralph Teetor came up with the idea whilst being driven by his lawyer, who kept speeding up and slowing down every time he talked. The inconsistency in his driving frustrated Teetor which prompted him to create the cruise control in the 1940s.

Automatic transmissions are beginning to outsell manuals in the UK

For the first time ever more cars with automatic transmissions were sold in the UK than manual gearboxes in 2020. With the growing number of Electric Vehicles that don't require gear boxes, manual cars are becoming a dying breed.

The average car spends 95% of its life parked

The average car is also 28% larger than in 1965 and by 2050 it is estimated that there will be 44 million vehicles on UK roads - found that parking space yet?

Highway Hypnosis is the name of a common driving phenomenon

Highway Hypnosis is the phenomenon of driving and responding to external events in the expected, safe, and correct manner but with no recollection of having consciously done so after the events.

Rolls-Royce have always had a focus on building durable vehicles. This superior build quality seems to be working with the majority of their vehicles still being used on the roads today.

The Volkswagen currywurst is very popular and even has its own part number 199 398 500 A. It's been rolling off the production line at the firm's Wolfsburg factory for nearly 50 years now.

Car radios faced pushback when they were first introduced

When car radios were first introduced in the 1920s/30s, there was a lot of opposition from people who complained that radios were too distracting and would cause more accidents, or even lull a driver to sleep.